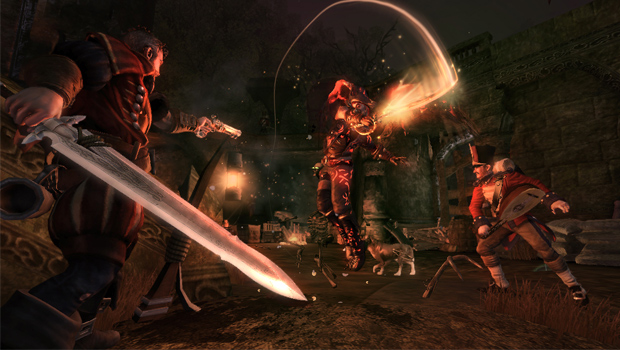 I am young enough to have been born around the time that video game consoles for the home began to become popular. We had a Sega Megadrive at home, and I played Sonic the Hedgehog with my Dad — those were fun times.

Over the last 20 years, the kind of content and quality of video games has changed dramatically. Modern game releases are filled with complex story lines, engaging characters and — like all artistic human expressions — meanings and meta-narratives.

In 2012, a game was released called Fable 3, a quintessentially English game that falls into the Action/Adventure Role-Playing Game category.

The basic premise of the series of games is a typical hero story: a young character (the gamer can choose male or female) experiences some sort of loss in their early life, and must then discover the power within themselves to overcome impossible odds and save the world. Not to put it too dramatically.

The game itself was a landmark in modern video gaming for a number of reasons.

The first is that it is a combination of genres and a compilation of experiences.

The game has everything from the nitty-gritty of gruelling battle and warfare, to the owning and running of a home, a marriage, a family and friends.

The game creates an interactive alternate reality based around moral decision making and the growth of the character that the player controls. The character changes in many ways based on the decisions made, aligning himself or herself as “good” or “bad”.

The moral decision aspect of this game is quite interesting. The game can progress in literally hundreds of different ways with numerous endings and consequences, based solely upon the player’s choices.

The tag line of the Fable Series (of which I enjoyed both the first and second installments also) has always been, “For every decision, a consequence”.

It is this aspect of the game that I find most stimulating as someone who generally tries to objectively understand and interpret the culture around me.

The game contains a dualistic approach to morality, where actions can be defined as “good” or “evil” based upon the consequences they create. This system of moral decision making has always been a hallmark of the series, and makes for engaging playing.

But whereas previous Fable games have been almost overly-simplistic in the approach to morality that they have contained, the most recent installment is far more complex it’s outlook and thought.

I watched this interview with Peter Molyneux, the chief bod and brain behind the Fable series and found his reflections quite interesting.

As you listen to him describing his vision for the game, it’s clear that he brings to the table a postmodern view of life, where morality is relative and certainly subject to our impulses and desires, rather than imposed upon us from Above.

The result is that the kind of decisions the player is faced with in Fable 3 are tougher, far less dualistic questions of moral choice.

Early on in the game, the player is forced to decide between the death of a love interest and close friend, or the leaders of a demonstration against a tyrannical ruler (the chief antagonist for most of the game).

Neither party appears to deserve death in the context of the choice — all that the player has left to fall back upon is preference. The concept is intriguing, isn’t it? That in this virtual and alternate reality, people are being faced with moral decisions and moral consequences.

And notice that I say people — not children.

Originally, video and computer games took their place in society as a pass-time for children that kept them out of trouble.

But the reality now is that they have become in my opinion, adult in their themes and content, as well as a significant cultural influence, akin to other forms of media such as newspapers, magazines and television.

I think Fable 3 is a persuasive piece of proof that evidences this, in that it’s voice acting for the story line and characters includes an absolutely all-star cast of famous British actors, authors and television personalities, including Jonathan Ross (Presenter), Stephen Fry (Actor, Author and Host), Zoe Wanamaker (Actress), John Cleese (Actor), Simon Pegg (Actor) and others.

To have names this big involved in a project of this size (there are over 47 hours of recorded vocals in Fable 3) surely reveals that this product is not intended for just children.

If you needed further persuasion, the mature content that the game contains seals the deal.

Christians need to exercise discernment about these issues.

We are very foolish if we blanketly pretend that there is no danger and nothing wrong in some aspects of the gaming industry.

Some of the content of the games that children are bought by their parents is simply despicable — content that no Christian of any age could righteously view and enjoy.

There are plenty of video games that glorify sinful actions, desires and choices by making them appear to be more enjoyable than choices of a good and wholesome nature.

Children need to be protected from the ungodly values portrayed as desirable in many video games today — parental oversight is absolutely essential to the safe use of these products.

But we go astray also when we swing to the opposite extreme and brand video and computer games as the height of all evil and expressions of the Devil himself.

There are plenty of games that can be enjoyed to the glory of God, as we sanctify them by the Word and Prayer — that is, we use them in accordance with the principles of God’s Word and give thanks to God for them with sincerity (1 Tim. 4:5).

So how then are we to think about these things in a redeemed way?

They can consume too much of time, drain to much of our resources, and generally become an overall waste of life.

It is in this way that most young men in our society play them.

Another sin that often uses video games as a means of expression is pride. Plenty of games out there today emphasis the personal greatness and glory of the player, and competition of all varieties can be an opportunity for pride — the same applies to sport and board games!

Christians are not to be boastful or arrogant in any thing they do — and yet plenty of people play video games in an attitude of selfish, vain-glorying, where all that matters is personal greatness.

Sometimes people plough their energies into video games because it gives them a sense of significance that they cannot find anywhere else.

For the Christian, we find our identity in Christ and Him Crucified, and nowhere else.

If we will not let Jesus be Lord of how we use our Xbox consoles and PC’s, what hope have we of making any difference to this our generation?

When people who seek their identity in video games turn to them for significance, it’s often the reaction of their pride to the reality of their personal failure.

Because they don’t feel like they can be somebody in the real world, they have to try and be somebody in a pretend world — a world where being significant is much easier than in this one.

One way it’s helped me to think about it is this: when I’m gaming, am I being asked to, or doing anything with the character I’m playing that I wouldn’t do in real life?

If I were actually in the situation, what would I do?

If I can’t do that, then maybe this game isn’t the kind of game I should play, lest I indulge in themes, ideas or actions that are not pure and lovely.

Obviously you can take this too far — but I’ve found it to be a useful litmus test for my heart.

I don’t think the Church can ignore video games for too much longer. We need to start thinking about and asking ourselves if and how we can use video games to God’s glory — and maybe even for the extension of the Kingdom.

We need Christians in this field, producing content, influencing the direction of the industry and standing for what it right, and pure and true and lovely.

And if we want to understand the rising generation of young people, the video games that they play have a tremendous influence upon how they think and feel about life, personal identity, right and wrong, and what really matters.

If we want to understand these people, we can’t remain ignorant of what the biggest and best games out there are really all about.

May God help us to do all things to His Glory, and to understand those around us that we might be clearer channels of His Gospel and Grace.

Do you play video games? Do you agree with Arron’s take? How should Christians engage with video games and the gaming industry? Share your thoughts in the comment section below.

is 23, married to Georgina and has a one-year-old son called Luke! He was converted in 2006 and is from the North of England, UK. Arron likes reading and writing, basketball, blogging and playing hide and seek with Luke. Arron is an occasional preacher in his local area and works in business development.