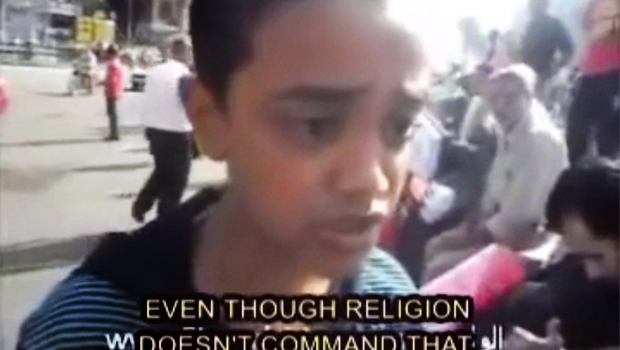 (WPN) — A video of a 12-year-old boy explaining the recent events in the uprising in Egypt has gone viral.

El Wady News recently interviewed young Ali Ahmed about why he was on the scene at the protests that led to the ouster of President Mohammed Morsi. Ahmed said, “I’m here today to help prevent Egypt from becoming a commodity owned by one person, and to protest the confiscation of the Constitution by one single party. We didn’t get rid of a military regime to replace it with a Fascist Theocracy.”

The interviewer for El Wady News is incredulous. “I don’t even know what that means,” the reporter said.

Ali Ahmed went on to explain, “Fascist Theocracy is when you manipulate religions and enforce extremist regulations in the name of religion, even thought religion doesn’t command that.”

The reporter wanted to know how little Ahmed knew all this. His reply could be a wakeup call to most Americans when it comes to involvement in the political process.

“I listen to people a lot, and I use my own brain,” he said. “Plus I read newspapers, watch TV and search in the internet.”

Ahmed was asked a few more specifics about things that he thought needed to change in his country. The people had already ousted one president in the past 2 years. Why were they now railing against this one? Ahmed’s reply was thoughtful and informed:

“The Police still jail people randomly. As for social justice, how can a news anchor get 30 millions Egyptian pounds while some people still pick food from garbage? Politically speaking, where is the Constitution that represents us? For example, women are half of the society. How come there are only 7 ladies in the Constituent Assembly, 6 of whom are Islamists?”