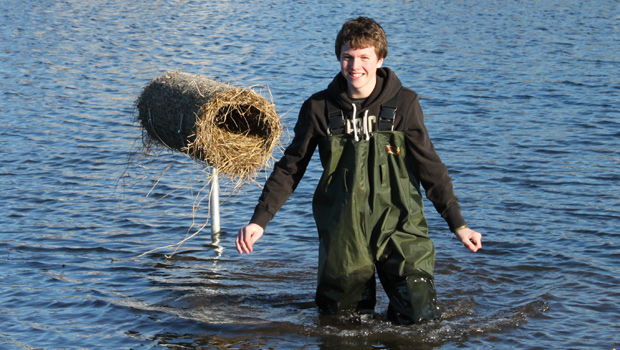 (CBC News) — One of the veterans of protecting the wetlands in rapidly growing Paradise, Newfoundland, has yet to graduate from high school.

Brendan Kelly has been working on protecting wetlands for six years, and can be seen patrolling the town with high-end camera gear he uses to document the town’s environment — all with a goal of protecting what is left.

“With so much development, especially in Paradise, one of the fastest growing communities around, it’s important that we got to protect some of our natural areas.”

Kelly got into conservation as a small boy by building birdhouses with his father. As he got older, he got more serious about his commitment to wetlands, and has been building nesting boxes to help bird populations thrive.

“We’ve set up tree swallow boxes on posts in the water for the tree swallows to nest on, and they have pretty much a 100 per cent success rate. Almost every one we’ve ever set up has been used,” said Kelly, who has also worked on projects for other species, including ducks and mallards.

Kelly, who will enter his final year of high school in September, has been working recently on Brazil’s Pond, and has plans for other ponds in the town.

He hasn’t, though, had the smoothest process over the years of getting people in the town to take him seriously, including Paradise Mayor Ralph Wiseman.

“At the beginning there were definitely a lot of people who were kind of like, ‘How do you know what you’re doing?'” Kelly said.