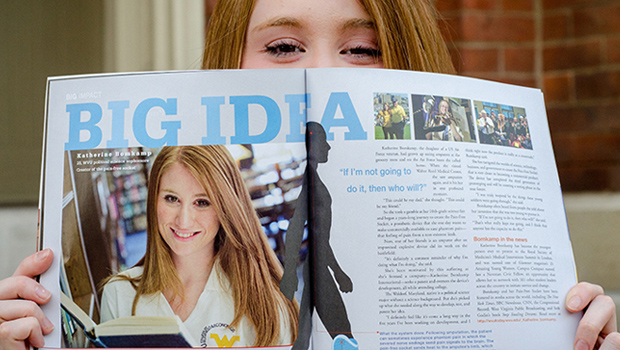 (New York Times) — Is advanced technical knowledge necessary to become an inventor? Look at the story of Katherine Bomkamp, and you will see that it isn’t.

Ms. Bomkamp, 20, came up with the idea behind the Pain Free Socket, a prosthetic device that is intended to ease phantom limb pain in amputees. The device, now awaiting a patent, works by applying heat to the amputee’s joint socket through thermal biofeedback. The theory is that as the nerve endings are warmed, the brain is forced to focus on the heat rather than send signals to the absent limb.

Now a sophomore at West Virginia University, Ms. Bomkamp was in high school when she began working on her invention. At the time, she had zero background in chemical or electrical engineering, which were essential to the creation of the device.

“It was all completely foreign to me. I had no interest in engineering before this,” said Ms. Bomkamp, who was a criminal-justice major at her magnet high school in Maryland. In college, she’s studying political science, with plans to attend law school.

Her experience shows how ambition, persistence and an ample supply of curiosity can lay the groundwork for achieving breakthroughs, even technological ones. (A bit of youthful pluck helps, too.) It also shows that drawing on other people’s experience and resources is often as good as, if not better than, doing everything yourself.

Politicians know this. Business leaders like Steve Jobs knew this. And yet, when we think of inventors, we think of a solitary soul hunkered down in a basement lab for weeks or months before emerging to claim an unshared victory.

To this, Ms. Bomkamp would say: think again.

The seeds for the Pain Free Socket were sown when Ms. Bomkamp, whose father is a disabled Air Force veteran, found herself in waiting rooms at the Walter Reed Army Medical Center — the hospital in Washington, D.C., that has since closed — seated among wounded soldiers just back from Iraq and Afghanistan. Many of them were amputees.

“They would tell me their stories, and phantom pain kept coming up,” she said. She started researching the condition and learned that “most amputees are prescribed antipsychotics and barbiturates, which are expensive and have high addiction rates.”

“So I wanted to see if I could eliminate the need for those drugs holistically,” she said.

An opportunity to pursue her idea came when her chemistry teacher announced a school science fair. Wanting to “do something meaningful that impacted the community,” she said, she decided to work on a device to treat phantom pain.

“My thought process was: When I pull a muscle, I apply heat to it. If I applied the same concept to treating phantom pain, I thought that could work.”

The only problem was execution. Ms. Bomkamp was the furthest thing from a math or science geek; there was no way she could do this alone. So she began e-mailing engineering professors at universities in the area and asking them for assistance. “They were all very receptive,” she said. “They all invited me to come work in their labs. I chose the University of Maryland because it was closest to my house.”

And so, every Friday, she would take the day off school — with permission — and her mother would drive her to College Park. There, she worked with Professor Gilmer L. Blankenship in the department of electrical and computer engineering, and his lab manager, Jay Renner. “They taught me electrical engineering from the bottom up — electrical programming, heat wiring,” she said. “Basically, everything, they had to teach me.”