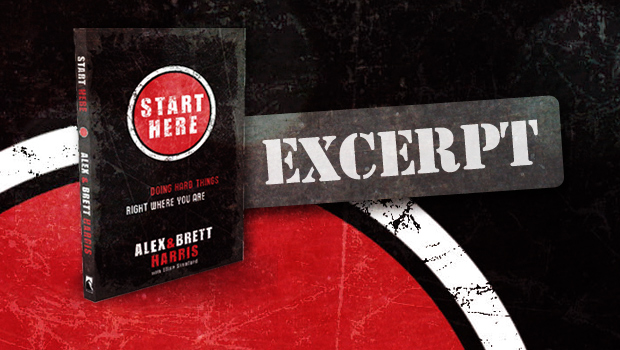 To answer this question, take out the word small. Do hard things really count? Of course! Remember, small doesn’t mean easy. We should still be stepping outside our comfort zones, going above and beyond expectations, and doing what is right, even if our actions don’t seem all that impressive to most people. Why? Because big or small, the hard things God calls us to do are about Him, not us.

That’s why, to fully answer the question, we have to ask a bigger one: What ultimately counts? If the answer is “being famous” or “what people think about me,” then small hard things don’t matter much. But when we read God’s Word, we find that small things have great significance, not just to prepare us for bigger things, but also for their own sake. And sometimes small hard things are the hardest things of all.

In Colossians 3:23, Paul writes, “Whatever you do, work at it with all your heart, as working for the Lord, not for men” (NIV). In 1 Corinthians 10:31, he writes, “Whether you eat or drink, or whatever you do, do all to the glory of God” (NIV). What Paul is saying is that everything — even something as simple as befriending someone in gym class — can be done for God’s glory. And that means nothing we do for God is insignificant.

This year I started attending a new public high school. It was in one of my PE classes during the first month of school that I began noticing the “outsiders.” As part of the class, we had to warm up by running five or six laps around the school track. For most of the kids in the class, including me, this was no problem. But not everyone was in the greatest shape after a long summer.

After finishing my laps, I was standing around and saw a girl who was behind everyone else. She was struggling to keep up. At first, I didn’t give her a second thought, but as I saw how much she was hurting, the Lord put her on my heart. I sensed that God was saying, Hannah, I want you to go run with her!

I felt really, really weird. I immediately argued back, What, Jesus? Are you serious? I’ve never even spoken to that girl! I don’t even know her name! But I knew I had to obey Him, even though everyone else in the class might think I was dumb.

So, saying a silent prayer, I jogged out to the girl. She was crying and struggling to breathe, but her face radiated with surprise and thankfulness as I came up beside her. Even though I didn’t know her, the love of the Lord brought us together and we finished those laps strong.

We doubt anyone in Hannah’s class patted her on the back, and her story certainly didn’t make the newspaper. Was it still worth it? It depends on how you answer the question we asked earlier: what ultimately counts?

The Westminster Shorter Catechism (an early Q and A about Christian beliefs) says, “What is the chief end of man? To glorify God and enjoy Him forever.” That means that simple acts of obedience, like Hannah’s, matter a lot. It also means that it is possible to dazzle people with the hard things we do and still waste our lives if we’re doing those things only to impress others and bring glory to ourselves.

Small hard things might have “small” results in this life, but as Paul encourages us, “Let us not grow weary of doing good, for in due season we will reap, if we do not give up” (Galatians 6:9). God will bring a harvest — whether in this life or the next—if we persevere in the everyday things He has given us to do at school and at home.

Do you feel God calling you to do something big for Him? Don’t despise the day of small beginnings. Not only are big hard things usually made up of a lot small hard things put together (so you’re getting good practice!), but also God has a way of opening new opportunities when we least expect it.

A few years ago, Jaime’s church partnered with a missions organization that uses humanitarian projects to share the gospel in rural Kenyan communities. Her church adopted the town of Karogoto, and Jaime soon discovered a pressing need in the town for something that most of us take for granted: shoes.

Jaime figured that her family wasn’t the only one with shoes in the closet they didn’t need. She set a goal to collect 150 pairs of shoes. Her plan was to kick off the drive with a Barefoot Mile at her high school’s track. People would come, donate shoes, and walk four laps around the track barefoot. Some adults questioned whether anyone would show up—but it didn’t take God long to prove them wrong.

“There were definitely low expectations,” Jaime told us. “It was discouraging, but I knew God could make it happen. On a rainy Saturday, fifty people showed up at the track—with 1,164 pairs of shoes! By the time the drive was over, God had brought in over 4,200 pairs of shoes for the people of Karogoto.”

Why do we share Jaime’s story in response to a question about “small” hard things? Because Jaime didn’t set out to collect 4,200 pairs of shoes. Her desire was to participate in the work of her local church. Her goal was small: 150 pairs of shoes. And even now, when we talk to her, she refuses to take credit for what God has done.

Stories like Jaime’s remind us that God wants (and will use) faith, humility, and availability—not glory-seeking, pride, or a preoccupation with our own ideas. If Jaime had thought, A few dozen pairs of shoes isn’t going to make enough of a difference, she would have missed a chance to see God do incredible things with a simple idea. If Hannah had second-guessed God’s prompting to do a “small” hard thing in gym class that day, she would have missed an opportunity to show His love to someone else.

Nothing we do for God is insignificant. When we have this as our mindset, then we won’t get proud if God allows us to do something big and we won’t get discouraged if we feel stuck in the small things. Remember, neither fame nor obscurity is the goal. The goal is obedience to God, effectiveness in whatever He gives us to do, and a heart that glorifies Him.

Whether we are called to live life on a big stage or behind the scenes, we cannot forget the words of Jesus in Matthew 23, who modeled this mindset for us: “The greatest among you shall be your servant. Whoever exalts himself will be humbled, and whoever humbles himself will be exalted” (verses 11–12).

Check back for more excerpts, or pick up a copy of Alex and Brett’s second book — Start Here: Doing Hard Things Right Where You Are.