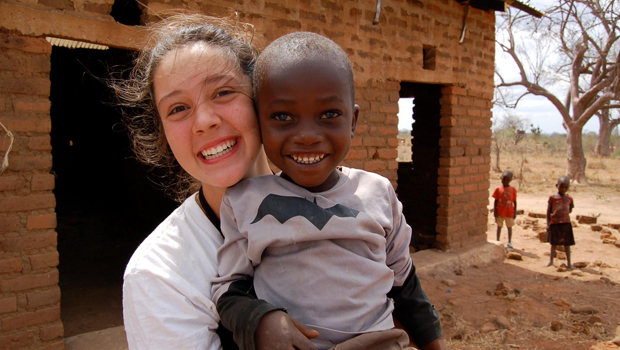 (Branson Tri-Lake News) — To say 17-year-old Riley Banks is on a mission could be considered an understatement.

The Branson teen has distributed hundreds of backpacks and school supplies to children in Kenya, provided more than 1,000 hygiene kits to girls there, helped provide a medical clinic for more than 1,300 people and opened a school this year. She does it all through her nonprofit Generation Next, which she set up before she could even drive. While she continues to collect school supplies, hygiene kits and oversee a school in Kenya, she is also working to open an orphanage there.

Aside from building a school, providing for children and opening an orphanage, Banks is a senior at Branson High School.

“I don’t think Generation Next would have grown like it has if God didn’t want me to be in this area,” the 17-year-old said recently sitting in her parent’s Copy Run store at the Shoppes at Branson Meadows.

Banks’ journey began when she was 13 years old.

Her uncle, a doctor, and his wife, she explained, were going to serve in Kenya for six months.

“I thought it would be neat to go and visit,” Banks said.

In order to afford the trip, Banks said she had to give up Christmas gifts and had to help raise money to pay for travel expenses.

“For my birthday, I asked for toys to take over there,” Banks said.

She made a two-week trip with her father, Lucas.

While the trip in itself was an experience, the biggest eye-opener came when she went with her aunt to help feed babies in a neonatal unit.

“All the babies were in these tubs,” she said.

The babies weren’t swaddled in blankets and weren’t even wearing diapers, for that matter. She wasn’t given a bottle to feed the babies, rather a small medicine cup.

It didn’t take long before the smell and everything became too much for the 13-year-old and she rushed out of the room before passing out.

“It was almost like a culture shock,” she said.

During that trip to Kenya, she also had an opportunity to volunteer at an orphanage, which is where she found inspiration for the first project that came out of Generation Next.

She said as children practiced writing, she noticed they were sharing a pencil. As one would finish writing a word, the child would pass the pencil to the next student. She said she realized how hard it must be to learn when they don’t have the right supplies, something many students in the U.S. take for granted.

“We came home from that trip and I was just like, ‘Wow,’” she said.

Soon after returning to Branson, with the help of her family, she founded Generation Next.

“The idea behind the name is if we help one generation, then they can go on and help the next generation,” she said.

At the end of that school year, Banks organized a school supply drive, asking students to donate their unused school supplies. With those supplies, Banks was able to return to Kenya, just a little more than a year after her first trip, this time with 200 backpacks full of supplies.

“I’d just fallen in love with these people,” she said.

It was during her second trip when she said it was brought to her attention another factor that impacts eduction of many students — the lack of sanitary supplies.

“I talked to the head mistress who told me a lot of girls, when they reach a certain age, they don’t come back to school,” Banks said.

She said often the girls couldn’t afford sanitary supplies and without the supplies, the girls often missed a week of school or would turn to prostitution to help with money.

“I thought that is not fair because these girls were my age and that should never happen,” Banks said.

For her third trip, Banks was able to collect enough items for 200 hygiene kits, as well as more backpacks. Also, during that third trip, Generation Next partnered with Nomad Charities, out of Bend, Ore., to host a medical clinic.

While helping at the clinic, she said she saw people who came through with HIV and AIDS, as well as many other diseases.

“That was pretty much the hardest thing I’d ever done,” she said.

During Banks’ third trip, they also began working to complete a partially constructed building. Banks explained that a man who had started work on the building, which was intended to be a school, was robbed and killed years before. The building hadn’t been touched after that, Banks said.

In 2012, when they were in Kibwezi, Kenya, they began working on the building. Since that time, Generation Next had been sending money to finish the building.

This summer, Banks was able to open the school named Pamoja, which means together. The school serves 50 children.

For Banks’ latest project, Generation Next has partnered with Nomad Charities again, this time to open an orphanage.

To fund it all, Banks spends most of her weekends speaking at churches throughout the state.

“I’ve spoken at a lot of different place and we have donors who send monthly (donations),” she said.

While the teen will admit it can be exhausting running a nonprofit while going to high school, she said she loves it.

“I’ve missed a lot of school this year,” she said.

Banks maintains straight As and said her teachers are always willing to work with her.

“I think I’m just focused on it because it is something I just love to do,” she said about Generation Next. “They say, if you do what you love, you never work a day in your life. I think that is so true.”

The Branson teen credits her parents, Tracy and Lucas Banks, for helping her keep it all together.

“My mom and dad are a big part of that,” she said.

She said her mom Tracy Banks is the organizer and makes sure she is where she needs to be every time she has a fundraiser or group to speak to.

While Banks said she recognizes there are people in need in the Ozarks, and she does work to provide for children in Taney County, she said her heart seems to belong to Kenya and the people there.

“I think it was just their attitudes,” Banks said. “They are the most positive people I’ve ever met. They are so thankful for everything God gave them because they might not have it the next day.

“Their spirit is just incredible. It is just something you don’t see here.”

While Banks said she would like to head to Kenya as soon as she graduates from Branson High School, she understands the importance of her own education and plans to attend college and get a degree in elementary education.

Then, she said, she plans to move to Kenya and live at the orphanage.

Tracy Banks said she is in full support of her daughter and her daughter’s dream, no matter where it seems to take their family.

“I don’t think she knew it would turn into this,” Tracy Banks said. “It is fun. It is hard work. We love it.”

For more information about Generation Next, visit generationnextcares.org.