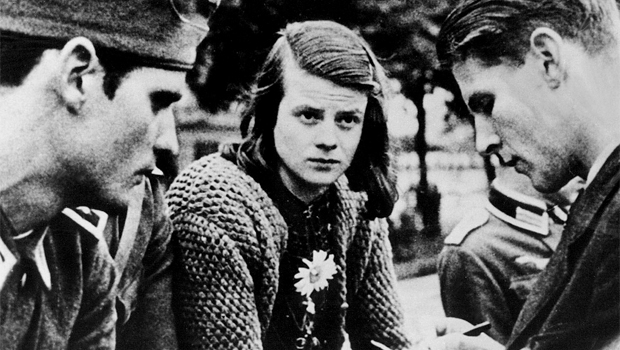 I remember talking about abortion with our neighbor over the backyard fence. She seemed to agree tepidly with the pro-life position, but added that it wasn’t really her concern.

We’ll leave that to other people, she seemed to think.

In America, over three thousand children are killed every day by abortion.

How is it that we, like our neighbor, have become so numb to this reality?

But we are not the first to face this fight. Faithful pilgrims have gone this way before; we just need to find their footsteps.

Millions of people were killed because of their race, physical infirmities, or resistance to the Reich.

Why didn’t the local Christians work to save lives? Where was their passion?

Not everyone was swayed by Nazi rhetoric.

But conformity was never their priority.

When Allied forces liberated the concentration camp Ohrdruf, General Eisenhower ordered that the local Germans visit the camp to see the Nazis’ atrocities.

The citizens—including the mayor—were horrified.

Even though the evils had taken place so close to their daily lives, they were still shocked to the point of despair.

Just as many of them never knew the extent of Nazi cruelties, too many of us simply do not know the truth about horrific abortion practices.

No matter what procedure is used, a child is violently killed.

But there are always some who know.

In Nazi Germany, a few courageous youth could stand idle no longer.

Under the name the “White Rose,” some university students—included the Scholls—began secretly printing anti-Nazi pamphlets informing the German people of Nazi evils. Fewer and fewer German citizens could plead ignorance.

Out of Sight, Out of Mind

“Where does the truth lie?” Hans wrote to a friend. “Should one go off and build a little house with flowers outside the windows and a garden outside the door and extol and thank God and turn one’s back on the world and its filth?”

There must have been some who suspected that the Nazis were committing evil, but even these were sheltered from the victims’ cries.

Similarly, most of us are rarely near abortion centers, watching women walk in and then walk out, the irreversible deed done.

It is easy to forget the suffering of others when it is hidden from us.

It is easy to move sad and seemingly hopeless topics to the back of our minds.

But Hans knew that this was no option.

“Isn’t seclusion a form of treachery—of desertion?” he continued. “I’m weak and puny, but I want to do what is right.”

What Can One Person Do?

“Many, perhaps most, of the readers of these leaflets do not see clearly how they can practice an effective opposition,” a White Rose pamphlet stated. “They do not see any avenues open to them.”

How do you fight evil when it is protected by the authorities, celebrated in the media, and taught as right in the schools?

The courageous White Rose members understood that these daunting odds were no excuse: “We want to try to show them that everyone is in a position to contribute to the overthrow of this system.”

Hans felt a burden for proof of his beliefs—and action would be that proof.

“It’s high time that Christians made up their minds to do something . . . What are we going to show in the way of resistance . . . when all this terror is over? We will be standing empty-handed. We will have no answer when we are asked: What did you do about it?”

The White Rose used what abilities and resources they had to produce pamphlets and then distributed them to their closest audience: university students.

They didn’t win the war.

But they did stand for the truth, and they were willing to face whatever consequences their stand might cost them.

And there were consequences.

One day a university janitor noticed the Scholl siblings frantically dumping out White Rose pamphlets to cover the university grounds.

On February 22, 1943, Hans and Sophie, along with another White Rose member, were executed.

But the fight was not over. And they knew it. Even as she understood how short her time was, Sophie realized what was at stake:

“How can we expect righteousness to prevail when there is hardly anyone willing to give himself up individually to a righteous cause. Such a fine, sunny day, and I have to go, but what does my death matter, if through us, thousands of people are awakened and stirred to action?”

Throughout World War II, lights shone out of the darkness of the Third Reich occupation. There was always a remnant who knew that standing for life was a higher priority than their own comfort—or even survival.

The war dragged on for two more years. The Scholl family, reeling from the losses of Hans and Sophie, as well as another son in battle, would never be the same again. Were their deaths in vain? Was their sacrifice wasted?

After the war, German citizens searched for a way to return to normalcy. Many who had been involved in the Reich now found themselves adjusting to life without Nazism. Among them was Hitler’s personal secretary, Traudl Junge:

Of course, the terrible things I heard from the Nuremberg Trials, about the six million Jews and the people from other races who were killed, were facts that shocked me deeply. But I wasn’t able to see the connection with my own past. I was satisfied that I wasn’t personally to blame and that I hadn’t known about those things. I wasn’t aware of the extent.

But one day I went past the memorial plaque which had been put up for Sophie Scholl…, and I saw that she was born the same year as me, and she was executed the same year I started working for Hitler. And at that moment I actually sensed that it was no excuse to be young, and that it would have been possible to find things out.

It’s a haunting phrase: “…it was no excuse to be young…” If Hans and Sophie Scholl determined to stand for truth and life—at their ages, in their difficult times—surely we can do the same.

What will we choose? To ignore the pain, hurt, and lies around us—or to pursue the truth and fight for life? The battle will be fought, no matter our stance. But will we choose the victorious side?

Our God never changes, and our charge still stands.

Our generation follows on the heels of many who have set the example in the fight for life. Their footsteps are large, and their legacy great.

May we be spurred on by those who have gone before, that great cloud of witnesses whose example inspires us to be faithful to what we have been called.

Where is our passion? It is there. We just need to be reminded that it is a righteous passion, and it calls for action.

Others may sit on the fence, but we know there is too much at stake.

is a writer and toddler teacher who can't remember the last time she read a book without highlighting in it or dog-earing it. Except for the ones from the library. She loves cookie dough ice cream, spending time with people, and seeing the clouds in the Midwestern sky. You can find more of her thoughts at These Traveling Days.