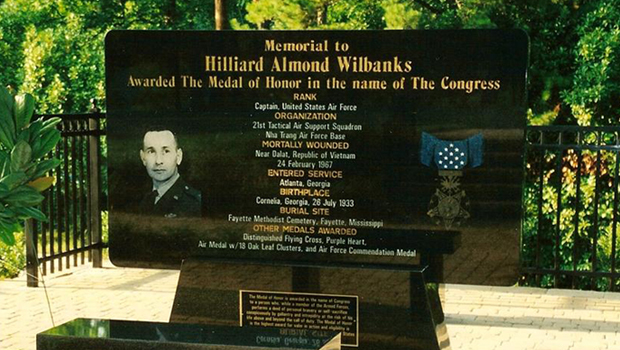 (AccessNorthGA.com) — “Do hard things.” That was the message given to Hilliard A. Wilbanks Middle School sixth-graders Monday morning.

The words came from John H. Wilbanks, son of the late Capt. Hilliard A. Wilbanks, on the 47th anniversary of the captain’s death in Vietnam.

Spellbound, the students heard firsthand accounts of Wilbanks’ heroism from eyewitnesses through means of video.

Wilbanks was a Medal of Honor recipient who was presented with the honor posthumously on Jan. 24, 1968. He died while protecting friendly forces from the Vietcong in his single-engine, unarmed plane.

Some of the students gasped when they learned that Farragut was given command of his first ship at age 12 – the age of many of the sixth-graders gathered.

Wilbanks told the students those three young people and others did hard things. Similarly, his father did many hard things.

“Capt. Wilbanks did hard things when he spotted the VC forces and marked their position with smoke rockets, and began to direct the fire of three helicopter gunships to cover the retreat of the Rangers,” Wilbanks said.

“Capt. Wilbanks did hard things when one of the helicopter gunships was hit and he ordered the other two to escort it to safety, leaving only himself to support the 23rd Battalion Rangers,” he said.

“Capt. Wilbanks did hard things when he assumed a close air support role, flying low over the treetops firing his M-16 out the window of his unarmored 0-1, drawing the enemy’s attention away from the Rangers below,” his son said.

“Capt. Wilbanks did hard things when on his third and final pass he gave his life,” John Wilbanks said. “To be sure, many did hard things that day. But Capt. Wilbanks’ unselfish acts of courage and heroism were able to minimize friendly losses. Before the battle was over, the Rangers had lost 36 members, but had it not been for Capt. Wilbanks that number would have been many, many more.”

Wilbanks challenged the students to “do hard things” to impact the world around them.

Following the ceremony inside, students and others gathered outside, where the Wilbanks family placed a wreath beside the memorial to Capt. Wilbanks.

Photo courtesy of The City of Cornelia, Georgia.