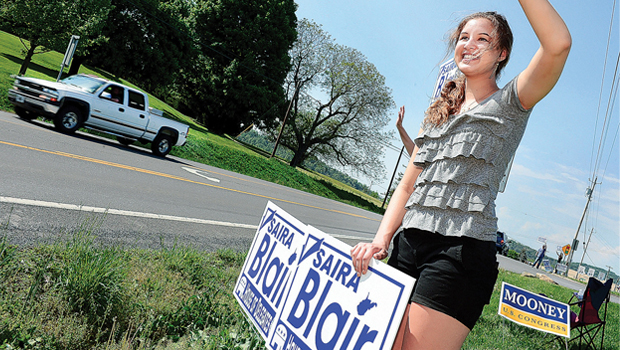 (Politico) — A week before her high school graduation, Saira Blair was barely old enough to vote when she unseated a West Virginia lawmaker almost four times her age.

After Tuesday’s GOP primary, the 17-year-old is one election away from becoming the youngest state lawmaker in West Virginia history. Larry Swan, sworn in as a 20-year-old delegate in 1972, set the current record.

Blair’s birthday is in July, so she would just meet the 18-year-old minimum age for West Virginia House of Delegates members. Seventeen-year-olds who will turn 18 by the November election can vote in West Virginia’s primary.

Soft-spoken and on-message, Blair is a churchgoer who says she is pro-life, pro-family, pro-gun rights and pro-business. She can rattle off a laundry list of businesses taxes she wants abolished or lowered.

“People saw that you don’t need to wait until you are 40, 50 or 60 to realize our conservative principles are beneficial to everyone,” the Martinsburg teen said of her primary win.

Blair also has family experience on her side. Her electrician father, Craig Blair, is a state senator who once held the House seat she is seeking.

The teenager has more on her mind than stump speeches. She graduates from Hedgesville High School next Wednesday. Then she’ll head to West Virginia University in the fall to pursue economics and Spanish degrees. She says finance is her field of choice.

Blair will skip spring classes if she clinches the Eastern Panhandle seat, since lawmakers convene for business in Charleston from January to March. The two-year House gig pays a $20,000 annual salary, plus per diem.

Only about 150 votes separated Blair from Republican Del. Larry Kump in the Eastern Panhandle primary, according to unofficial results. But midterm turnout was dismal: Only about 1,600 votes were cast in the 59th House District.

“Quite frankly, she out-campaigned me,” said Kump, 67, finishing his second House term. “It was a low voter turnout election and she won.”