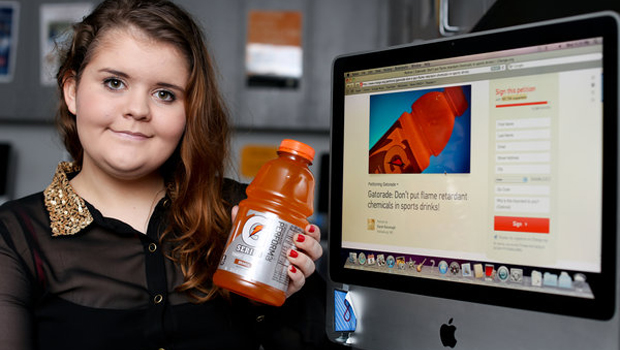 (Upstart) — Few teens can lay claim to getting the attention of one Fortune 500 company, let alone two. Meet Mississippi teenager Sarah Kavanagh, who launched an online competition over an ingredient in both PepsiCo and Coca-Cola’s sports drinks. Both drink makers have removed it.

Coca-Cola is dropping an ingredient its Powerade sports drink, following in the footsteps of its rival PepsiCo., which made the same change to Gatorade last year. What’s surprising about this is not so much that it happened but one of the names associated with the ingredient changes at these two Fortune 500 companies.

Mississippi teenager Sarah Kavanagh was just 15 when she started stirring things up for PepsiCo and its Gatorade drink via a fall 2012 petition on Change.org which asserted that brominated vegetable oil, one of the ingredients listed is linked to a flame retardant, and is not approved for use in either the European Union or in Japan. She later did a separate petition making the same complaint about Coca-Cola’s Powerade drink brands.

A representative for Atlanta-based Coca-Cola confirmed Sunday that its Powerade brands are now “BVO-free,” but it was unclear when the change would be complete or how the drinks were reformulated. Meanwhile, this comes in the wake of PepsiCo saying last year that it would drop the ingredient from Gatorade, which according to industry tracker Beverage Digest commands 64 percent of the sports drink market.

Neither company has said that it made the changes because of Kavanagh or the petitions against each of their products, but the moves certainly came amid substantial negative customer feedback. The Powerade petition had more than 59,000 online supporters while the Gatorade one had 200,000-plus, according to an Associated Press report.

“Consumers are coming together quickly and efficiently to influence the world’s biggest beverage companies in an unprecedented manner,” Pulin Modi, senior campaign manager for Change.org told the AP.