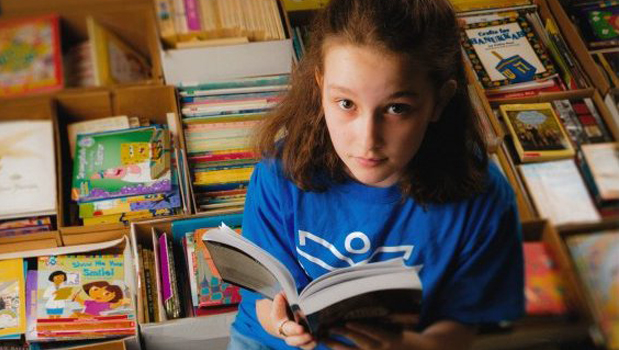 (HuffPo) — At age 8, Maria Keller, of Orono, Minn., learned that not all children own a book. Determined to do something about it, she declared she would donate 1 million books to kids in need by the time she turned 18.

Keller not only reached her goal this week, she did it five years early.

On Tuesday, a children’s book publisher in Mankato, Minn., gave the 13-year-old philanthropist the last 36,000 books she needed to reach her goal, Fox affiliate KMSP reported.

“I’m thrilled to see my dream to give books to kids, hundreds of thousands of kids, come to reality,” Maria wrote on the website of her nonprofit, Read Indeed.

Keller has distributed books to hospitals, schools and nonprofits around the world.

According to an Oct. 9 entry on the site, Keller’s tally is actually now 1,012,227. But she isn’t stopping there. She urged the contributions to keep coming and said she would launch a new literacy initiative soon.

Keller hovered around the 800,000 mark in February, the Sun Sailor wrote, drawing admiration for her campaign.

“For somebody so young and doing this for other people, it just shows what kind of heart she has,” Jodi Valentino, executive program director for a child development center, told the publication.

Maria, an avid reader who lists “The Giver” among her favorite books, began her crusade with family and friends. She then graduated to staging local book drives and used the garage to store the donations. The inventory grew so large that the family secured a warehouse, with volunteers helping to sort and box, KARE 11 reported in 2012,

Now that Maria has surpassed her pledge, her mother, Maura, reflected on her accomplishment. “What amazes me is how many lives she’s touched,” she told KMSP.