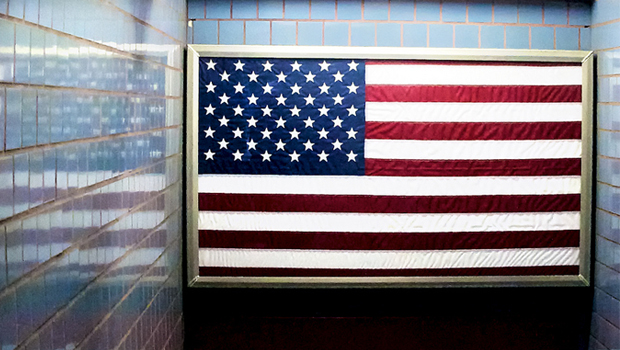 A while ago, I wrote a short article about whether or not Christians should stand up for their rights.

I knew it was not exactly what most Americans idealize, but I was still surprised at the “push-back” I received from it.

Let me be clear: I am not anti-American in the least — in fact I am extremely grateful for the blessings God has given us Americans. God has blessed us with wealth, ability to travel, and the rights to participate in government.

I also strongly believe that God’s blessings are never given so that we can pursue our own personal pleasure or safety, but so that we may glorify God.

Our deeds may be remembered in history, but will be forgotten in eternity. We will have gained the whole world, but lost our eternal treasures.

Indeed, my concern has less to do with whether Christians should stand up for their rights, although I wince at that too, and more to do with the mindset of Western Christianity.

The problem really is our mindset. What do we have our minds set on? Is our goal to preserve the American way or to retain our American freedoms? If so, then our purpose will be determined by America’s success, instead of by the advancement of the Kingdom. We will be bound to the temporary instead of the eternal.

“Is our goal to preserve the American way or to retain our American freedoms? If so, then our purpose will be determined by America’s success, instead of by the advancement of the Kingdom. We will be bound to the temporary instead of the eternal.” — Christopher Witmer

Or is our first desire to enter and participate in building God’s kingdom and becoming righteous as He is? Nations rise and fall according to God’s will — according to what brings Him glory. He is not concerned with a nation’s glory, but with His own glory. That is His motif, His aim, His business.

Jesus made it very clear from the beginning that His purpose on earth was “to be about His Father’s business.” Jesus calls all men to follow Him in this. Furthermore, Jesus said that if we do not “hate” our own lives and family then we cannot be His disciples. He really said that! Look it up: Luke 14:25-26.

In other words, we must love Christ so much that our backgrounds, closest relationships — even our very identity — appear to be hated. C.S. Lewis said that “until you have given up your self to Him you will not have a real self.”

Jesus put it another by saying that if someone does not bear their own cross and follow Him, they cannot be His disciple (Lk. 14:27). The cross is the very essence of someone giving up their rights for God’s kingdom.

This is what we are called to as Christians: to forsake our comfort, our safety, yes, even our very lives — our rights — and follow Jesus Christ, ultimately into eternity. In other words, we are no longer concerned with having those things.

Jesus saw the bigger picture. He knew that the Father had put the whole world “under His feet” (John 13:3; 1 Corinthians 15:27; Ephesians 1:22), and that many lives would be eternally saved through His temporary suffering. An earthly kingdom held no attraction to Him — He already was the King of the universe!

Jesus did not come to set up a physical kingdom, but a spiritual one. He came to save men’s souls. He came to lead us into a battle not fought with politics, guns, or swords; but with truth, righteousness, faith, salvation, the Word of God, and by spreading the Gospel of Peace (Eph. 6).

Jesus calls us to live by the Spirit, which means living a life of love, joy, peace, patience, kindness, goodness, faithfulness, gentleness, and self-control; rather then a life of sexual immorality, idolatry, enmity, dissension, drunkenness and so forth (Galatians 5:16-26).

God doesn’t call us to live safe lives, make money, marry, have kids, and repeat the process. He calls us to live completely surrendered to Him: to sell everything we have and follow Him, to abandon ourselves and the regular pattern of human lives and throw ourselves at His mercy through a life of faith.

Faith is not carefully negotiated and logical, nor is it flimsy and impulsive. Faith is simply obedience to God, doing what He says whether it seems reckless or slow and tedious.

Giving your life to Christ is not like winning the lottery or maneuvering Wall Street: it is like a pauper finding out he is a prince. It is not simply a life improvement, but a radical life transformation.

Our freedom is not determined by whether or not we can gather publicly to worship, speak our political beliefs or participate in government.

Our freedom is determined by whether or not we can say “no” to sin (Satan) and “yes” to the Son of God, because if the Son has set you free, then you are free indeed — regardless of physical, political, or social circumstances (Jn. 8:36).

The problem is not just about standing up for our rights: it is about the priorities and heart conditions of American Christians.

It really is true that “God looks at the heart.”

Therefore, keeping His commands without an actual heart-change means nothing to Him. Neither do the laws of a nation mean anything to God if the hearts of the people are not bent toward Him. And if our hearts are bent toward God, we will change (keep His commands; Jn. 14:15).

That is my point.

We get so caught up trying to change everything on our own efforts that we forget things can only change by the power of God.

Whether it is a nation, a church, or an individual needing change, it is always Jesus who brings redemption, not politicians, not pastors, not church parishioners, not protestors — only Jesus.

So unless we bring Jesus to individuals, we are not building the Kingdom, but merely a temporary sandcastle.

The closest Jesus came to making public protests or demonstrations was against the so-called “people of God.” This would be more similar to someone going into a nearby mega-church and turning over all the tables in their café than to picket Washington.

Jesus was upset not because the government was corrupt, but because the “people of God” had turned the House of God — the house of prayer, of healing, of redemption — into an economic and political powerhouse.

My concern is that the American church has become infatuated with political influence and social standing and has forgotten its original call: to love (Mark 12:30-31; Jn. 15:12; 1 Corinthians 13; Matthew 18:16-20). To love God by obeying His commands; to love others by calling them to repentance and introducing them to Jesus who gives grace and by showing them His love as described in 1 Corinthians 13.

Instead we either alienate culture through our politics or try to imitate culture and become socially acceptable but forsake Christ.

What if Christians stopped fighting among themselves and with unbelievers and actually began living lives of faith and love? What if instead of compromising to please culture, we loved individuals unconditionally while remaining faithful as followers of Christ?

What if we actually loved God in private, not just on stage? What if we quit worrying about being refined, tasteful, and trendy, and started being ourselves, newly born in Christ? What if we actually obeyed Scripture — all of it — instead of explaining away certain sections we do not understand or feel comfortable with?

There is power in obedience, in living lives of worship to God, in prayer, but instead we have become infatuated with becoming famous, rich, and influential. We love how Jesus makes us feel more than we actually love Jesus.

We are so concerned with preserving American prosperity, safety and idealism, that we cannot properly see how to prevent the culture from rotting right before our eyes.

Instead of imitating how Jesus influenced people, we imitate how Washington and Hollywood influences people.

Instead of making the culture more like Christ, we’ve made “Christ” more like the culture. Meanwhile we have actually forsaken Christ and His true Gospel which is the power of God for saving lives.

“Instead of imitating how Jesus influenced people, we imitate how Washington and Hollywood influences people. It doesn’t work. Instead of making the culture more like Christ, we’ve made ‘Christ’ more like the culture.” — Christopher Witmer

But it all starts with changed hearts, not changed politics.