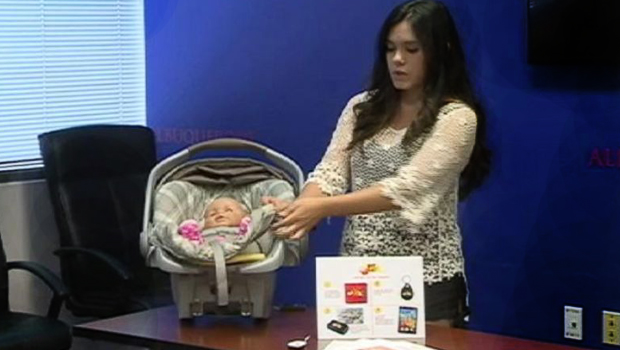 (CBC News) — A 17-year-old girl from New Mexico has invented a device that alerts parents — and passersby — if a child is left in their car.

The invention by Alissa Chavez of Albuquerque aims to reduce the chance that a child will die in an overheated car.

The teen has been working with engineers to perfect the design of the device, called Hot Seat, and is now raising money on the crowdfunding site Indiegogo to develop a prototype so it can be manufactured.

The device consists of a pad that senses if a child is in the car seat and communicates wirelessly with a fob attached to a parent’s key chain.

If the parent walks more than 10 meters away without the child, it will trigger alarms on:

– The parent’s smartphone, via an app.

“If the parent doesn’t have the key fob or the cellphone, the people around the vehicle will still be able to hear the alarm,” Chavez told CBC’s As It Happens. Chavez hopes to raise $10,000 US on Indiegogo to build a prototype that manufacturers can use to mass produce the device, perhaps as soon as the end of this summer. As of Tuesday morning, she had raised $9,000, with less than three days left to go in the campaign

Chavez said her mother runs a home daycare, so she was really affected by stories about children dying in hot cars after being forgotten by accident.

“I couldn’t imagine losing any of the kids we work with.”

A few years ago, that inspired her to create the earliest version of Hot Seat for her Grade 8 science fair project. She won the regional competition and went on to the state and national competitions.

Chavez said she has received a lot of positive feedback about the device from people who feel the invention needs to be out there.

“So many people have accidentally left their children in their car, and it didn’t turn out to be a tragedy,” she said, “but it still did scare them, that that can happen to anybody.”

The Canada Safety Council estimates between four and six children die from being left unattended in vehicles every year.

According to the advocacy group Kidsandcars.org, in the U.S., 44 children died of heat stroke after being left in cars in 2013.