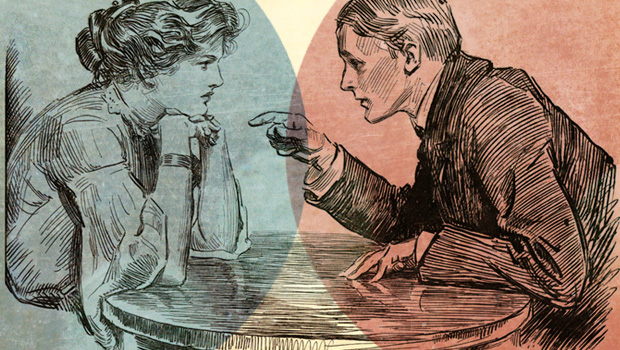 Ready for a peace rally? Of all the reasons people fight, one of the worst, I think, is because some are male and some are female. Why can’t we just relax and get along?

There is something wrong about feminism. We know that as Christians. But sometimes we take it for granted and don’t stop to think about what it is. Just what is it that makes feminism wrong?

Well, what makes anything wrong?

Think about this: Most feminists are women. I notice there’s always a tone of, “Look what they do to us! We can’t let them do this to us. We deserve better,” when it comes to feminism. It becomes a concern for yourself, and you become obsessed with it to the point that you get defensive when someone does something as innocent as using the word “he” when describing a random someone when it should technically be “he or she.” Doesn’t that strike you at all as a slight obsession with self?

So, returning to the question of what makes anything wrong, just what is at the base of all Christian morality? The new commandment, right? Love one another. It’s as simple as that. Can you effectively love others when all you can do is worry that you might not be getting fair treatment? I don’t think so. God doesn’t make arbitrary rules. The reason for anything being condemned is that in some way, it grates against the new commandment.

In light of the fact that this is really the simple problem with any wrong philosophy, is the way we’re responding right? To me, there’s always seemed to be something a little off about this obsession with getting the gender roles just so.

It happens a lot even on this blog. We make some kind of reference to knights and chivalry. (Chivalry, by the way, didn’t originally mean consideration for the fair sex, but for enemies. Interesting shift of meaning.) Then we go on and start trying to put it into modern context and get a little hung up on the door-opening thing. After that, we quickly run out of concrete examples. Sometimes we resort to going into how wrongly the culture portrays men now days. And it’s “Look what they do to us!” all over again.

As I was researching for this article, I found a curious thing. It seems we give this subject vastly more attention than the Bible does. There’s only a handful of verses of the subject of gender-roles. Actually, the Bible says more about donkeys. Why would we be so intent on emphasizing anti-feminism? Might we be getting slightly defensive?

Some people might find this article provocative. Another issue with this subject is it tends to get people arguing. After all, it’s difficult not to get emotionally involved in it. It’s a little personal. We’re all either one or the other sex, you know. (Sorry, it’s true.) It’s difficult not to get defensive when we start telling each other how to be. Even within the separate schools of thought, there are dozens of hair-splitting disagreements. You have to step back and think, “Am I really doing this for the good of the Kingdom of God? Or do I have my own interests in mind?”

You probably have your own opinions on this. You may have just come in from the streets still voiceless from screeching over some women’s rights issue. Or maybe you think all the world’s problems could be solved if women would all dress up in Jane-Austen inspired gowns and stand around waiting for men to open doors and pull up chairs for them. Maybe you’re like me, and are just a little puzzled by what all the fuss is about.

But in all this, are we missing the point? It’s a bit of a red herring, don’t you think? Not that I don’t know jolly well why it comes up so much. Young people are interested in their relationships with the opposite sex, and the wise ones want to get it right. (There are a lot of Amish dime novels you might enjoy as well.) But don’t get too distracted. We’ve got to keep our focus straight, and we’re going to have to stand together more than apart to do it. Hair-spitting will get us nowhere. Bitterness will get us nowhere.

You know… All I’m saying is “give peace a chance!”

is one of five other equally uncanny children living in a brambly forest in northeastern Indiana. She enjoys writing, making music, creating art, scaring the neighbors (those that stayed), and dancing by the light of the moon. She is fascinated by the great expanse of the universe and intent upon the pursuit of God.