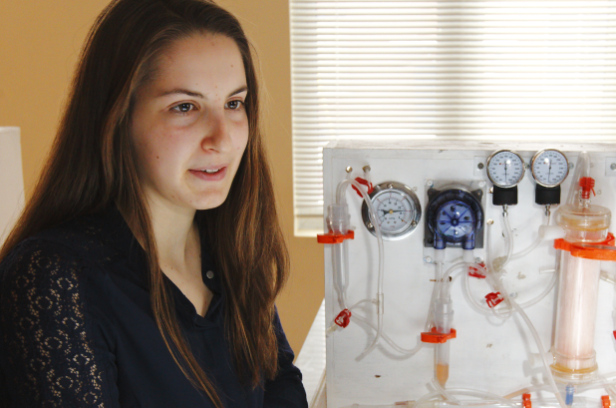 (CTV News) – What started off as a science project may have a revolutionary impact for dialysis patients.

Montreal teenager Anya Pogharian has received international attention for a portable dialysis machine she created for a local science fair.

“I wanted to mimic the exact same circuit as a dialysis machine because I’m trying to see if the cost can be reduced while maintaining the functionality,” explained the teen inventor, who has spent well over 300 hours on the project, even though the science fair only required 10.

Inspired after a summer of volunteering at the Montreal General Hospital, the teen said she realized that a portable system could make a major difference.

Typically used by kidney disease patients, dialysis removes waste and excess water from the blood. It can be a time-consuming process.

“Dialysis normally takes hours in a hospital setting, several times a week,” she said, adding that a portable machine could help bring the treatment to those who need it abroad. “Like for example, 90 per cent of patients living in India and Pakistan who need the treatment to survive don’t have access to it. So, a lot of preventable deaths.”

She started researching the problem online and read owner’s manuals of dialysis machines to provide inspiration and insight into how to invent her own.

While dialysis machines currently cost about $30,000, her second prototype cost about $550 to build and is receiving international interest.

Hema-Quebec approached her with an idea to test it in their Quebec City lab. The results were impressive.

“We were expecting to run the system for 2.5 hours and after 25 minutes (the patient) was already in the zone where we wanted the level of potassium to be, so the system was quite efficient,” said Yves Blais, vice-president of research and development for Hema-Quebec.

They’ve invited Pogharian back to test her third prototype when it’s ready.

are about young people just like you who are defying low expectations, solving problems, doing good, and changing the world one hard thing at a time. To send us a story, email [email protected]