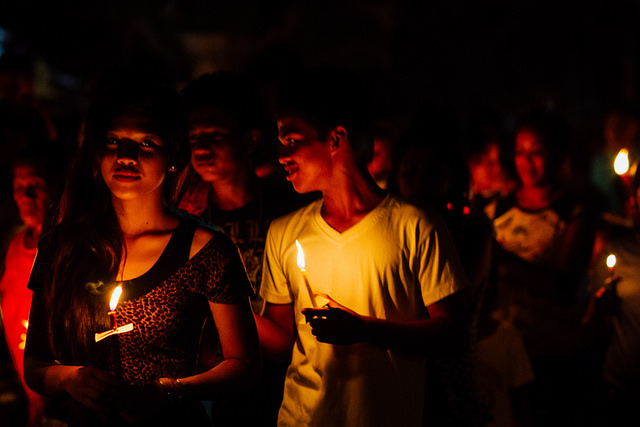 At first glance, the title of this heading looks like it might be a reference to the training montage of Rocky Balboa in Rocky IV (1985).

The Italian Stallion underwent grueling preparation in frigid Russia to the motivating tune by John Cafferty. He trained hard to face Ivan Drago in the ring and secure a knockout.

Or maybe the title is in reference to any number of songs by Thousand Foot Krutch. They tend to repeatedly incorporate the elements of fire into their music.

Truth be told, Hearts on Fire is the name of the youth group I attended at church during my four years of high school. Incidentally, I never thought to ask the youth pastor about the origin of the group’s name, but since I attended a Pentecostal church, I would surmise that Acts 2:3 may have factored into the original decision to go with this compelling name.

If you recall the second chapter of Acts, the Holy Spirit fell at Pentecost, and a spark was ignited inside the hearts of the disciples to go forth and change the world in the name of Jesus.

We Didn’t Start the Fire

Do you remember the first line of The Purpose Driven Life (2004) by Rick Warren? “It’s not about you.”

We are inherently selfish creatures, but God continually nudges us to turn our attention outwards to others to serve them like Christ would. That said, what does it look like to have a heart on fire for God?

One thought comes to mind. Serving others requires sacrifice, and the first instance of this in the Scriptures alludes to fire.

God, always faithful to His promises, finally provided Abraham with a son (Isaac). But then God tested Abraham to see if he would freely return his son to God as a sacrificial burnt offering. Abraham brought wood, a knife, and the fire to do as God requested, but an angel of the Lord stopped him from following through. Instead, a ram caught in the nearby bushes served as a sacrifice to God. God told Abraham that he would richly bless him for his obedience.

In the Old Testament, fire is consistently associated with sacrifice. Fire denoted gratitude to God for his provision of good things. The way we now think about fire is different, though. Sacrifice has been seared.

Fire, a passion within the spirit to follow Christ and emulate His character through sacrificial love – this is powerful. But this passion, by way of the tongue, can drastically overreach from time to time. The apostle James remarks on this tendency: “Likewise, the tongue is a small part of the body, but it makes great boasts. Consider what a great forest is set on fire by a small spark” (3:5).

He goes on to tell us that the tongue is a fire, and we all know too well that words can burn a person’s spiritual and emotional character to the ground. Social media is the active, living proof of this truth.

In summary, mind your tongue.

In a recent article for Desiring God, Executive Editor David Mathis sat down with scholar and author Don Carson to discuss the significance of how our words should be spoken as people who hold fast to the manner of Jesus.

Dr. Carson had this to say:

“What is first of all required is to take our cues on conduct and civility and tongue – what we say, what we think, where we’re going, what our values are, living in the light of eternity, living under the shadow of the cross – take all of that from Scripture, from the Gospel, from Christ and subconsciously work toward being a counter culture, a different culture, one with an allegiance tied to the kingdom of God.”

May your tongue burn with a passion, but also be one that refuses to pummel others with a scorching blaze.

You Are My Oxygen

I’d be remiss not to include Thousand Foot Krutch as their songs consistently revisit the significance of fire and the way it serves as a metaphor for strength, passion, and intensity.

Song titles like “Set Me on Fire,” “Light Up,” “Let the Sparks Fly,” “Fire It Up,” and “The Flame In All Of Us” undoubtedly validate this intrigue with a blaze that consumes whatever it touches. Maybe that’s what we as Christ followers really desire – a blaze that originates from the inside and is not squelched by even the strongest fire hose, a watered-down worldly philosophy that consistently attempts to diminishes the flames by whatever means possible on a daily basis.

I realize that summer is here and school is fading from your mind for a few months, but think back to chemistry class for a moment.

Fire, if you recall, is only as strong as the oxygen that keeps it burning brightly. In short, no air means no fire.

God is the author of life and thus the source of our strength. He is our oxygen. Remember the first man in Genesis 2:7? “Then the Lord God formed a man from the dust of the ground and breathed into his nostrils the breath of life, and the man became a living being.”

Each breath – the inhalation of oxygen – is a testament to the living God.

The Vine and the Branches

Fire is powerful, and it can also serve as an agent of judgment. This is fitting as the book of Revelation employs many references to fire as the end of days is unpacked in startling detail.

Jesus highlights the power of fire in one of His well-known parables. He speaks of being rooted in Him (the vine) as He works through us (the branches) by way of the Holy Spirit. God is in this process too. He serves as a gardener of sorts and prunes the branches in the hope that they would “bear much fruit” (John 15).

But what of the branches that don’t remain in Christ? They are discarded and thrown into the fire to be burned.

From a practical standpoint then, what does it look like to remain in the vine, that is, to pattern your life after Jesus? What does it mean to have a heart on fire for God? Abraham shows us that our lives can be a living sacrifice if we obey the prompts of God and follow them fully (also noted in Romans 12); James shows us that we need to be aware of our tongues and the words that follow when we speak; and Jesus lovingly reminds us to be tied into the vine so as to not be useless and discarded to the burn pile.

Do this and your fire will burn brightly like a city on a hill for the world to see (Matthew 5:14).

Do this and your influence will be sweeping and strong and mighty, a fire whipped up by a forceful wind.

Or as Thousand Foot Krutch might put it: “Watch me light up the sky.”