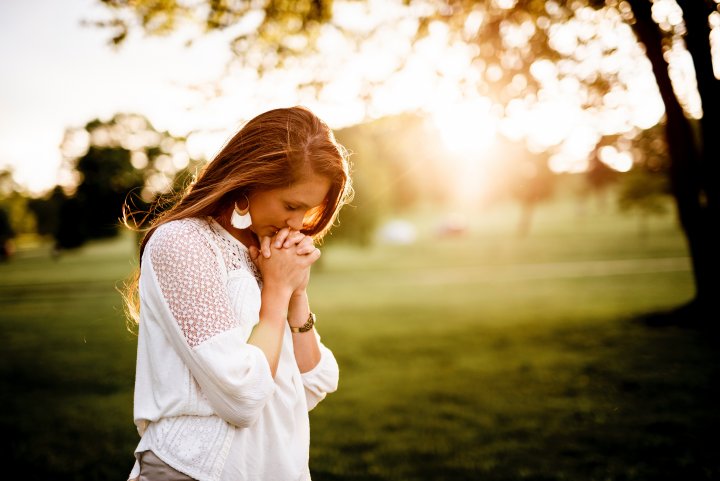 I shivered as I read.

I knew that many of Christ’s apostles and early disciples were heavily persecuted; but I wasn’t prepared for the gruesome deaths detailed on the pages before me.

I closed my eyes, but couldn’t remove the gory pictures from my mind. Stoned. Fed to lions. Burned as torches. And worse.

Would you do it for me, Anna?

I hesitated. Tears filled my eyes. Lord, I don’t know if I could… I whispered. Shame filled me. It was easy enough to say, but with the gun or torch or stones pointed at me—could I do that? Would I refuse to deny my Lord, even at the cost of my life? With all my heart, I wanted to say yes. But deep in my heart, I knew I didn’t have the courage.

True Courage Is Not From Ourselves

For the next several weeks, the idea of martyrdom kept pressing on my heart. I did research on today’s martyrs—many at the hands of militant groups and tribal warfare in Africa and the Middle East (also, interestingly, places of some of the Church’s fastest growth). I read about families forced to choose between Islamic radical conversion, or the muzzle of a gun.

I read about heroes of the faith from years gone by, who walked to their deaths singing hymns of praise to God, arms outstretched. And I wondered. I kept praying, seeking the Lord for answers, begging for a deep enough love, a strong enough will, a powerful enough courage, to say “Yes, Lord!” in the face of death.

And God graciously answered me in surprising ways.

As I was reading a John Piper message, the verse appeared: “If you are insulted because of the name of Christ, you are blessed, for the Spirit of glory and of God rests on you.” (1 Peter 4:14).

And I realized—with an overwhelming tide of relief, thankfulness, and awe—that if I were to stand for Christ in the darkest of times, it would not be by my doing. It would be by the power of the Spirit of God. I fell to my knees before my Lord, and my prayer became: “Oh, God, that your Spirit would rest on me and grant me the grace to endure in that day!”

I was amazed by his grace—that he would be with us, even unto death. All throughout his Word, God provides with assurance that we will be given what we need—not that we have it in and of ourselves.

All throughout his Word, God provides with assurance that we will be given what we need---not that we have it in and of ourselves. Click To Tweet

I could finally say yes to God, because I knew that such an answer did not ultimately depend upon me. Just as the Scriptures teach we cannot declare Christ as Lord, or bear godly fruit, without the Spirit (1 Cor. 12:3 and Galatians 5:22-23, respectively), we cannot esteem Christ as better than life without the power of the Holy Spirit. We do not need to worry what will happen then; in that day, it would be given to us what to say (Matt. 10:19). He is faithful, and promised to provide a route of escape for us to resist the temptation to deny him (1 Cor. 10:13).

It made complete sense. How else did the saints not only endure, but embrace with joy, their executions? How did Perpetua guide the nervous soldier’s sword to her throat? How did the faithful in the arena pray for the most glorious deaths, that they might display God’s glory? How did Nicholas Latimer exclaim the exultation of Christ as the fires burned beneath him?

God, who began a good work in them, finished it (Philippians 1:6). He would not let the ones he chose before the foundation of the world (Eph. 1:4) fail or fall away (John 6:39). The cloud of witnesses, and the grace poured upon them in their last hour, stand as a testimony to Christ’s complete faithfulness (Heb. 12:1). Would we trust him for this ultimate test of our faith?

As I was praying through this and discussing it with a mentor, they remarked that perhaps God had laid this on my heart as a metaphor for daily dying. I had been pondering and seeking the Lord on whether he had called me to foreign missionary work; I knew that, where I felt God might be calling me, death would crouch behind every step.

Thus, though thankful for the advice, I dismissed it from my mind for several weeks. I had been a Christian for two years and, I thought, pretty familiar with dying to myself. God didn’t need to go to such lengths to teach me a lesson I’d already had a good handle on, right?

This version of my thoughts sounds very conceited—and it was. Truly, I had such little understanding of the meaning of “dying to myself.” I gave my brother the last brownie—check. I did the dishes and made my bed instead of surfing the web—check. I called to encourage a sister in the faith—check. God, by his grace, enabled me to crucify my flesh in many ways for his glory and to sanctify me—but so often, it seems, I boil it down to a checklist for the day. As long as I had more checks than x’s, I was fine, right?

Well, God challenged my passivity to death. He used the idea of martyrdom, should I become a missionary abroad, to open my eyes to the importance of dying at home—right where I was.

While I prayed, I realized that God had given me my mission field—right here, among my unsaved family! Everything I’d thought were routine tasks were opportunities to work for his glory! Each conversation, every exchange—a chance to reveal what Christ was doing in my life! As much as in Africa, these were dying souls who needed to hear the Gospel of Jesus Christ.

While I had begun to come to terms with denying evil overseas, would I deny the fleshly evil here? I wanted to risk my life for him out there—but would I give it up for him each day at home? Crucifying the flesh is not easy. It can be excruciatingly painful at times—like proclaiming Christ as we’re savagely beaten. To produce the utmost fruit in our daily lives, we need to cling to the vine and not ourselves (John 15:5), like we would standing before a corrupt court.

We need to trust that God will give us our great reward, even if suffering and pain have to (and will) precede it. Crucifying ourselves is the task of every Christian, and only God chooses if that extends to physical death. But both require losing our lives, and God judges our faithfulness based on what he has given us, not what we wish we had. (Matthew 25:14-30).

There are danger and dire threats in the West---of laziness, of comfort, of selfishness---that tempt us to forget Christ, perhaps even more convincingly (and subtly) than blatant persecution. Click To Tweet

There are unreached souls all around us, at home, and work, and university, and Africa. There are danger and dire threats in the West—of laziness, of comfort, of selfishness—that tempt us to forget Christ, perhaps even more convincingly (and subtly) than blatant persecution. Make no mistake, those who desire to live a godly life in Christ Jesus will suffer persecution (2 Timothy 3:12)—but it will be on God’s terms and timing, and not ours.

Will you fight the battle God has uniquely given you?

Trust that his calling for you is where you are, rely on the power of his Holy Spirit, and fight the good fight of faith by dying to yourself each and every day. It will be difficult, but each pain-filled step is precious to God, and he will reward you for your faithfulness.

is a college student and edits for her school's Christian publication. She hopes to one day reach hurting women with the Gospel through her career, words, and lifestyle, and is passionate about knowing and sharing Christ. She loves Jesus, writing, coffee (and anything that combines them), Audrey Hepburn movies, Elisabeth Elliot, and anything soul-stirringly beautiful.