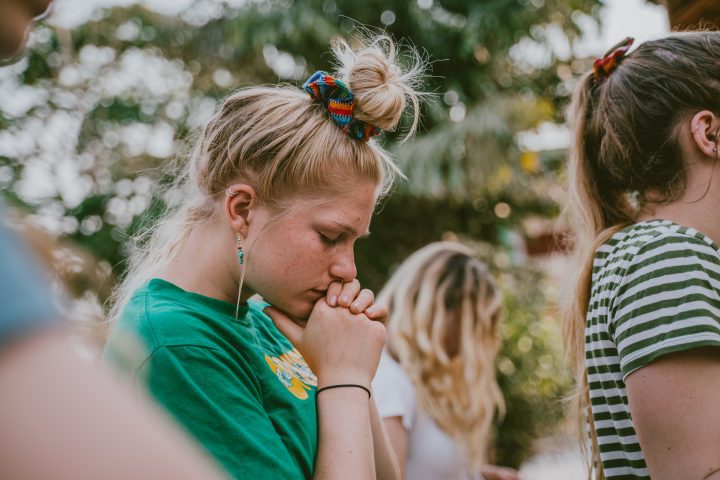 I was crying and screaming.

I have severe anxiety. It wakes me up at night, gives me nightmares, and when my body doesn’t know what to do with all the built-up anxiety, it shuts down and makes me pass out. The panic attacks I experience make me want to just lay down and never get up.

The day I was finally diagnosed with anxiety, I fell on my face and cried. I felt alone and abandoned.

While I yelled at God and claimed that I trusted Him at the same time, I continued to try and figure it out on my own. In my head, as ridiculous as it may sound, I had listened to the lies that reasoned, “God doesn’t care about you, and neither does anyone else. The only one who cares about you is you. Nobody else cares if you are hurting because everyone else has too many of their own problems. The only reason anyone would help you is if they could get something out of it.”

Before the diagnosis, I had felt closer to God than ever before. I was learning, seeing, and experiencing Him in powerful ways. But I gradually began reading my Bible less. Then the diagnosis hit, and I finally realized how alone I was. However, instead of going to God, I went to other good things instead of the best thing. They didn’t solve the problem (they actually made it worse), and two weeks later, I was deeply hurt by someone I trusted.

After that event, I finally crawled to my kitchen table and opened the Word. I read verses that made the lies in my head shiver and scream. Verses like Psalm 9:10, “And those who know your name put their trust in you, for you, O Lord, have not forsaken those who seek you. Or Deuteronomy 31:8, “It is the LORD who goes before you. He will be with you; he will not leave you or forsake you. Do not fear or be dismayed.”

As I read those verses, tears streamed down my cheeks. I realized these things:

This sounds opposite of what I’m trying to express. But God did leave me. However, He didn’t abandon me. He left me to test me to see what I’m really made of. This idea is biblical: “… God left him to himself, in order to test him and to know all that was in his heart.” (2 Chronicles 32:31).

He left me to see how badly I need Him. Today, I praise God for all of that hurt because it caused me to come running back to Him.

And even though He stepped back, He was never far. When I finally called out to Him repenting, He pulled me close and reminded me once again how much I’m desperate for Him.

2. God’s love isn’t something to be cynical about

If you’re struggling to accept love from God, tell Him. You aren’t foolish to believe in God’s love just because someone in the past may have hurt you. Think about how far you’ve come. We are continually reminded in the Bible to remember the good things He has done for us. God hasn’t brought you this far to abandon you now, He promised He never would. Just because you couldn’t see Him in your situation doesn’t mean He wasn’t ever there.

We often believe love is a feeling. It’s all about the warm, fuzzy stuff. While that’s all wonderful and enjoyable, it doesn’t last. Ask any couple that’s been together for a long time or think about your relationships with your family. Love isn’t a feeling, it’s a choice.

One of the biggest takeaways from the entire experience was facing the reality of my pride. I discovered it had taken over my body like cancer.

Throughout the Bible, the ones who were seen as righteous and great, knew the only way they could stand was to kneel. Click To Tweet

While I would never say, “I don’t need God or anyone else,” my actions demonstrated I believed that. I lived with the illusion that I was being “realistic,” but in fact, it was a coverup for my ego. It’s essential to come to God and humbly ask for repentance. Hezekiah had to do the same thing (2 Chronicles 32:24-26). Numerous times throughout the Bible, the ones who were seen as righteous and great, knew the only way they could stand was to kneel.

Not Crushed, Not Forsaken, Not Destroyed

“We are afflicted in every way, but not crushed; perplexed, but not driven to despair; persecuted, but not forsaken; struck down, but not destroyed.” (2 Corinthians 4:8-9) Other versions of the latter verse say, “Never abandoned by God.”

God didn’t promise to not give us more than we could handle. He often gives us more than we can handle because He wants us to remain dependent on Him. Think about where you are in your relationship with Him. You are continually being molded and shaped into the person He has created you to be. Therefore, take courage in knowing even if it seems you can’t see Him, know He has actually guided you the entire way.

Sixteen-year-old Maya may be quiet, but her passion for God and pursing Christ is certainly not. What she values most are the simpler things: making her friends laugh by showing them the latest and greatest memes, writing and playing worship music, playing soccer, cheering on the Minnesota Vikings, and doing anything that stimulates creativity.