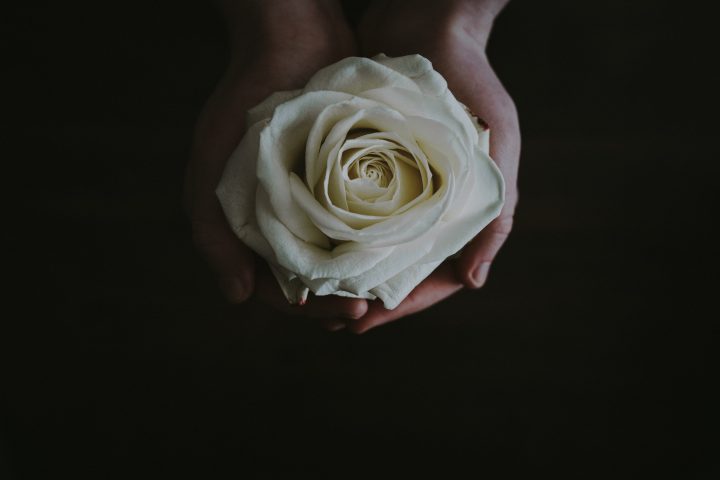 The train stopped, but no one stirred. Hans stared out the window.

Amidst the dirt and rocks, a few spring flowers were sparsely scattered. Not ten yards from the train, a group of prisoners were working on a new set of tracks.

Sweat ran down their faces as they swung pickaxes into the rocky ground. He frowned. Women shouldn’t be doing such work! They were prisoners, yes, but the bands on their arms told him that their only crime was being Jewish.

One girl in particular attracted his attention. Her brown hair hung loose and she paused to brush it off her face. She reminded him of the wildflowers that were growing near her—terribly thin and delicate yet carrying herself with beauty and pride. A feeling of pity washed over him. Then his brow furrowed. She doesn’t need you to feel sorry for her, Hans, she needs you to do something!

But what could he do? He recalled the chocolate bar in his pocket.

Shoving the window open, he slipped out. Before anyone had noticed what he was doing, Hans crossed the distance that separated the two tracks.

He walked up to her, holding the chocolate at arm’s length. It seemed like a trivial action in the face of such woe.

She paused her work, laid aside the pick, and took the package. She stared down at it, looking somewhat confused as she read the label. Suddenly, the bewilderment on her face was replaced with anger. Without a word, she threw the candy back at him.

It was not quite the reaction he had expected. Someone tries to be kind and that’s how she responds! I’ll bet she won’t be so proud when she’s gone hungry for a while!

Hans quickly checked his thoughts. What was he saying? The Germans had made themselves her enemies and to her he was just another German. How could he make her understand that the present wasn’t meant to taunt her?

Glancing around, he noticed again the flowers growing nearby. He quickly procured one and then bent down to pick up the chocolate bar which was still on the ground where she’d thrown it. On it he laid the little, white rose.

Again he held it out to her. “I just wanted to please you.”

She hadn’t taken her eyes off of him the entire time. Now she looked more astonished than she had at first.

The train was starting to move again so Hans quickly pressed the gift into her hands then dashed off to catch it. He caught hold of the metal rail just in time. With a leap, he pulled himself up onto the platform. He caught one last glimpse of the girl before she was out of sight–the flower tucked in her hair.

It seemed like a trivial action in the face of such woe–but Hans still chose to do it.

It would do little to help her. It could have cost him greatly. Still, Hans chose to do it.

Hans Scholl was a German living in the midst of the Second World War. Surrounded by people who practiced hatred and cruelty, Hans resolved to use every opportunity to do good–no matter how small. This was a decision that would come to characterize his entire life.

The Birth of the White Rose

On that same trip, Hans gave a package of cigarettes to an old man–another prisoner. Simple actions like these turned into a resistance organization called The White Rose that Hans led with the help of his sister Sophie, and a few close friends.

They determined to resist the Nazi regime, but not through a complicated strategy. Instead, they took up Hans’ simple motto.

Every man, they felt, needed to make use of the opportunities he had. To resist in whatever way he could.

For Hans and his friends that was through the written word. With a single typewriter and a duplicating machine, the students wrote and distributed thousands of leaflets hoping to encourage other Germans to rise in passive resistance. “We fight with our words,” Sophie said.

When matched against Hitler’s power, an apathetic nation, and unfathomable acts of cruelty, it must have seemed like an insignificant and hopeless task–a simple plan pitted against a great enemy.

But they were determined to do whatever they could.

A resolution which cost them their lives. In February of 1943, Hans and Sophie Scholl and their friend Christoph Probst were arrested and sentenced to death. Several of their other friends were also executed in the months to come.

After the war was over, it was revealed that the highest levels of the Nazi party considered the efforts of these students to be one of the greatest threats that had come against the Third Reich!

That should make us stop and take notice.

A simple act, with great cost, and seemingly little result proved to be one of the most effective methods of resistance.

Too often we do nothing because we don’t think what we do will matter. We are afraid our work will be insignificant, unprofitable, or badly received.

We act only when results are promised. Only when they seem great enough to warrant the expense of our time, our money, or our effort.

But Zechariah 4:10 says, “Do not despise these small beginnings, for the Lord rejoices to see the work begin.” (NLT)

As Hans also said, “It’s high time that Christians made up their minds to do something. . . . What are we going to show in the way of resistance . . . when all this terror is over? We will be standing empty-handed. We will have no answer when we are asked: What did you do about it?”

It isn’t up to us to ensure success. We are responsible only to do what we can, as well as we can. To be able to answer the question, what did you do?

Let’s be willing to do whatever we can.

*The story above is written in a historical fiction format but is entirely based off of the biographical record of Hans and Sophie Scholl as recorded by their sister, Inge Scholl, in The White Rose. All facts about them were taken directly from that resource.