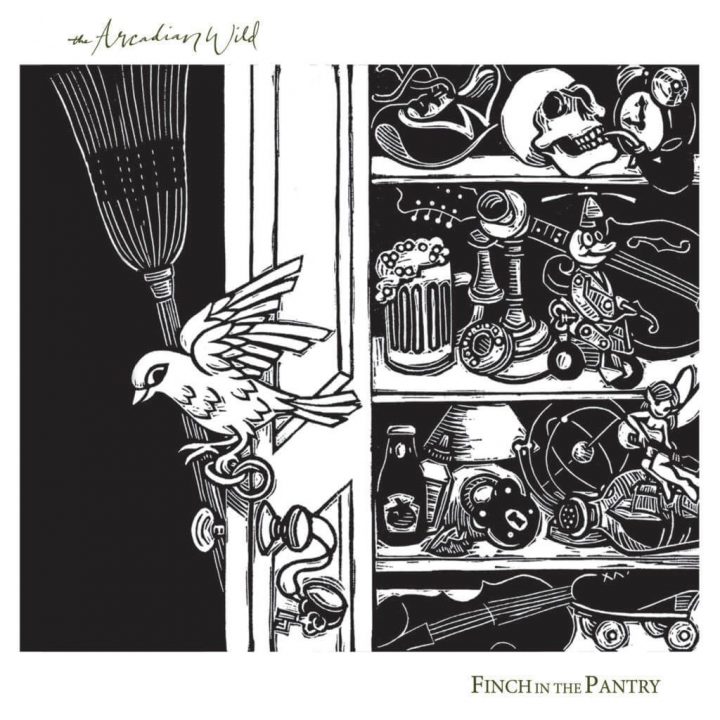 The first time I listened to an Arcadian Wild album, I think I was cleaning a bathroom.

Maybe that’s why that album (and eventually the rest of their work) became my cleaning music. When Saturday rolls around and I need to clean so I don’t drive my roommate crazy, I put on the band’s self-titled album and sing along. At the end of every break, when I have to pack up the suitcases again, the tedious job becomes a lot more bearable with fiddle music filling the room.

TAW’s latest album, Finch in the Pantry, picks up on a lot of the traits that have always made the band’s music excellent and improves on them: honest, heartfelt lyrics that dig deep into the fundamental realities of human existence, set against a backdrop of upbeat acoustic, slightly bluegrass melodies. The instrumentation and singing here becomes a lot more precise, as though the band knows what they want to say and exactly how they want to say it. And as a beginner-intermediate violinist, I can only stand in awe of the fiddle on many of the tracks (not like it wasn’t good in their earlier work, but in this album it’s right in the spotlight).

Finch in the Pantry is an exploration of communication; of conflict, both inner and interpersonal; of the need to speak and the desire to remain silent; of community, both our need of it and how we discover it divinely provided; and ultimately of how faith and providence sustain us, even when we don’t realize it.

The album hits the ground running with the first song, “Hey, Runner!” (sorry, I had to do it). The singer (the “runner”) is “just a volunteer,” serving an unidentified someone with “an ego that can fill a room.”

Whoever the singer is, he sarcastically takes issue with the situation, making for a song that ends up being immensely relatable for anyone who’s worked in a customer-facing job (fast food, anyone?). It’s also worth noting the structure of the song: the conflict with an unidentified opponent or adversary introduces a theme that will be developed throughout the album.

This is followed up by the similarly sarcastic opening of “Tell It Like It Is.” Again, the singer addresses an unidentified opponent—but this time it’s a lot more personal. This person has made up their mind, not only that the singer is wrong, but that they know exactly how to “fix” him.

However, this conversation is echoing the singer’s much more intense inner conflict, with the opponent “just an echo of the voice in my head.” By the end of the song, it’s not entirely clear that the opponent is another person at all.

“Finch In the Pantry” is the first of the album’s instrumental tracks, a gorgeous arrangement of mandolin and fiddle. The mandolin leads with the melody, which is then taken up by the fiddle and the two instruments weave in and out in a complex dance.

Hands down one of my favorite songs ever is “Silence, A Stranger.” The lyrics poignantly address our fear of silence—the terror that if we let ourselves be still we’ll come face to face with facts of life or parts of ourselves that we don’t want to acknowledge. We’ve already noticed the singer’s inner conflict, and it’s here again, but he’s emphatically attempting to ignore it; at least, until the last chorus. If you don’t listen to anything else on the album, listen to this song.

“Food Truck Blues,” featuring guest artist Buddy Greene, acts as a kind of interlude to offset the serious tone of the rest of the album. It’s a hilarious take on the warning we’ve all had drummed into us—the story of the kid who “went to Bible college, but then up and joined a band… He’s workin’ on a food truck, with that four year degree.” It’s cynical, in a way. Anyone going to school or pursuing a career in the arts (or worse, ministry!) can relate to the comments about how you’re going to be working in fast food. But in the end, it’s hopeful. The song ultimately about hard work and the necessity of perseverance—and how sometimes following your calling will require doing some unpleasant things.

“Stan the Man,” the second instrumental track, is another full, gorgeous arrangement. The fiddle gets a lot of stage time here, with lots of double stops and quick passages that require some very nimble fingers (although the same goes for the other instruments as well).

“Oh, Sleeper”—oh, what to say about this one? This is another of my absolute favorites. It picks up on the theme of internal and external conflict to deal with our tendency to “deny and avoid the fight.” Don’t we all do this—ignore the sins, lies, and issues that need to be dealt with (within ourselves and with others) in order to fit in and avoid conflict? The lyrics are intensely heartfelt, expressing the longing to show our own face and the fear that drives us to “ignore the raging war within my soul to keep the peace.” Some long instrumental passages, ironically (intentionally?), allow time for reflection.

“Civil War” follows directly (without break) on the heels of “Oh, Sleeper.” This song delves into the conflict at the heart of each of us. It’s a climactic moment of the album when the band sings, “After all, we’ve all got our own type of tension, Type of involuntary civil war tearing us apart if we never really stop…”

But with the undercurrents of lyrics like “I can’t stop everybody noticing every time I’m burdened by involuntary motion” it’s also surprisingly relatable for anyone with a mental illness. If there’s one song on this album that really gets me (no matter how many times I listen to it), it’s this one.

“Holemabier” is the third and last instrumental track. If anything it’s even more technically impressive than the others, and truly a joy to listen to. I love the build from simple picking at the start to a full sound at the end of the track.

2020 has been a hard year for everyone… but perhaps especially for graduates. “The Graduate” expresses the disillusionment and feeling of inadequacy that seems to come along with growing up. But it’s also a beautiful reminder that in all our wandering, we’re never alone. Maybe it’s a bit of a charge, too—to step out into the conflict that inevitably comes with living, and “together we’ll make our way home.”

And on the heels of that charge, the band offers a final blessing. In “A Benediction” offers not so much a reminder as a prayer:

We know death has lost already and the war has already been won. So we can step out into the fight, trembling but fearless, weak but sustained by a strength greater than we can understand.