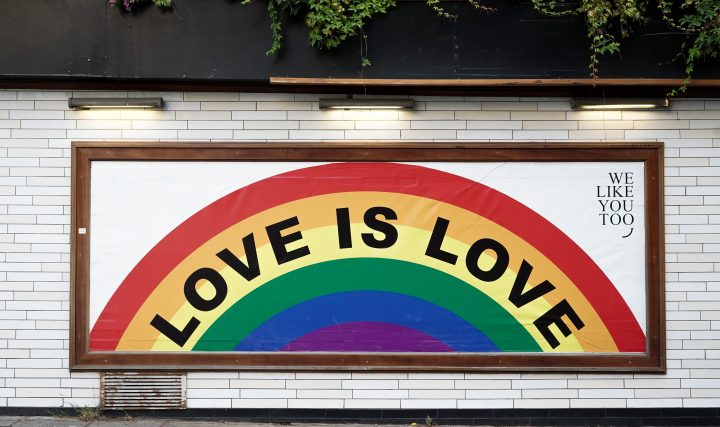 We’re currently in the thick of LGBT Pride month. Even before the first day of June, rainbow flags have fluttered over streets and in store windows. “Love is love” is plastered on shirts and signs everywhere we turn.

What should Christians believe in a culture like this? Is LGBT Pride month a bad thing? Do LGBT rights merely promote equality? Is there anything wrong with the rainbow flag? Shouldn’t we be able to love anyone we want?

In a culture of confusion, it’s difficult to discern truth from lies. As believers, we must turn to Scripture so we can remain steadfast in Christ's Truth. Click To Tweet

In a culture of confusion, it’s often difficult to discern truth from lies. As believers who seek to uphold the truth and honor Christ’s name, we must turn to Scripture so we can remain steadfast in a raging storm of confusion.

Love is often defined today as “an intense feeling of deep affection.” According to this definition, love wavers depending on how one feels from moment to moment. Love is subjective, meaning that it changes based on the individual. One may love someone of the opposite sex, while another may love someone of the same sex. There are no absolute standards to guide how we feel. Love differs from person to person.

But biblically, love is an action that we are commanded to do. 1 John 4:7-8 tells us, “Beloved, let us love one another, for love is from God, and whoever loves has been born of God and knows God. Anyone who does not love does not know God, because God is love.” Jesus was the ultimate example of love when He gave up His own life and died on the cross for His people whom He loved (1 John 4:10). Although He pleaded with God the Father while in the garden of Gethsemane to allow Him to not partake of such suffering (Luke 22:42), He bore the torture of the cross despite His feelings.

Love has been twisted. The media lies about what love really is. In the Bible love is not a feeling it is a choice, which means we have the ability to choose whom and how we love. It is not something we simply “fall” into. Click To Tweet

The nature of love has been twisted and distorted in our society. Mass media daily lies to us on what love really is. Love is not a feeling that cannot be controlled or guided. Rather, it is an action of the will. Biblical love is a choice, which means we have the ability to choose whom and how we love. We can control our desires. In the Bible, love is a command. Love is not something we simply “fall” into.

But I believe the battle runs deeper than this. The battle is over whose kingdom reigns: ours, or God’s. Deep within each one of us is the desire to put self at the center. It is a desire to be our own gods and do whatever we want to do.

The real battle is a battle against God as King and Ruler over all, and what He tells us in His Word. In the Old Testament, there are several laws against homosexual acts and relationships (Leviticus 18:22, 20:13). Later in the New Testament, Paul tells us, “Do you not know that the unrighteous will not inherit the kingdom of God?” Included in the list of the unrighteous are “men who practice homosexuality” (1 Corinthians 6:9). Paul goes on to say that “such were some of you” because the power of the Holy Spirit radically transforms lives in salvation. Romans 1 speaks of homosexual relationships and “passions” as being “contrary to nature” as God created them (Romans 1:26-27). When God gives people up to these dishonorable passions because they refuse to worship God as their Lord, it’s a sign of God’s judgement.

We’ve been told that the battle is about love. But the real battle is a battle against God as King and Ruler over all, and what He tells us in His Word. Click To Tweet

What Is The Purpose Of Marriage?

The purpose of marriage and romantic relationships lies far deeper than mere attraction. As stated earlier, love is an action that we can control, not something we are a victim of.

When God first created mankind, he created them male and female, to be together in the context of marriage (Genesis 1:27). God created Eve as a helper for Adam so that he would not be alone (Genesis 2:18). Throughout the Bible, when marriage is mentioned or written about, it is always between one man and one woman (see Mark 10:6-9, 1 Corinthians 7, Colossians 3:18-19, and 1 Peter 3:1-7).

In Ephesians 5:22-33, wives are told to submit to their husbands and husbands are told to love their wives as Christ loved the church, giving Himself up for her. This passage says that marriage is a mystery, only shared between one man and one woman. The reason why marriage must only be between man and woman is because it beautifully portrays the love that Christ and His church share. Marriage is meant to point the world to the gospel, which can only be done when it is between a husband and wife.

Marriage must only be between man and woman because it is made to beautifully portray the love that Christ and His church share, and point the world to the gospel, which can only be done when it is between a husband and wife. Click To Tweet

Throughout the Bible, God is referred to as the groom, and His people are His bride. God rejoices over us as a bridegroom rejoices over his bride (Isaiah 62:5), and the church is betrothed to Christ, awaiting His imminent return, and preparing herself for Him (2 Corinthians 11:2). We eagerly await the marriage supper of the Lamb, when the bride will finally be ready for her groom after adorning herself in pure garments for His return (Revelation 19:7-8).

I pray that we will uphold every human being with dignity as God’s image bearers and speak the truth in love to those around us. May we be a people who share the gospel of Jesus Christ to others, bringing their sin into the light of God’s Word to show their desperate need for Him. I pray we remain steadfast in the storm of confusion, holding fast to our anchor in the storm despite the waves that rage around us.

By Kyla Hardee 8 months ago
4 comments