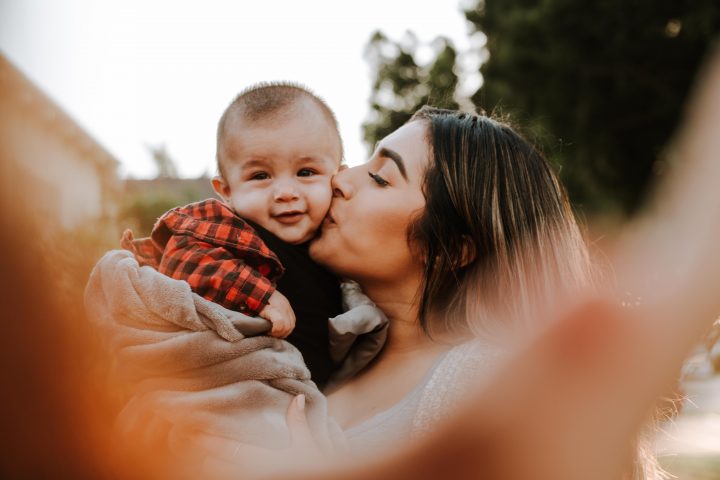 “What do you want to be when you grow up?”

It was my least favorite question when I was a little girl.

“Oh, I don’t know,” I would casually reply. In reality, I wanted to be a mom, but I couldn’t quite figure out why I was so ashamed of that.

My parents were always supportive of my dream to get married and raise my own children someday. They love that this is still a dream of mine, which I believe is part of God’s calling for my life. My sister wholeheartedly agrees! But something I’ve noticed from the time I was little is that this generally strikes people as unusual.

Among my peers, I thought I was the only one.

“I mean, you have to actually do something with your life,” I recently heard someone say to her friends about another girl, “She can’t just be a wife and a mom.” Hearing this absolutely broke my heart. That’s why I rarely told anybody this was what I wanted. I didn’t want to be gossiped about or shunned because of what I was meant to be.

Every time I see a mother holding her sleeping newborn out in the hallway during church, I smile and think, “Now that’s who I want to be like!” Many girls my age are inspired by record-breaking woman athletes or revolutionary woman scientists or motivational speakers promoting, “Girls can do anything boys can do!” Women who follow their hearts and defy all odds! But my inspiration is all the gentle and caring young mothers in my life. For myself at least, I see a career no more rewarding than that of nurturing my own children and bringing them up to know the love of God.

So what’s so wrong with a young girl wanting to grow up to be a mom?

The answer is nothing. Absolutely nothing.

Going Against the Standard

My sister, who’s a couple years younger than I am, was recently asked by a friend, “What do you want to do after high school?” She then answered that she wanted to someday get married and be a mom, the honest truth. But then the friend responded, “No, like your real job.”

“But you can be so much more!” the world says, “There will be plenty of time for family after you establish a career!”

My mom quit her job when I was born and has never gone back to it. Her primary job from then on was raising me and my sister and caring for us as we’re growing up. She and my dad raised us to love and fear the Lord, as God instructs parents to do.

Motherhood is a Calling That Glorifies God

You won’t meet any moms on career day at school, neither will you come across a motherhood stand at a high school job fair. Granted, it would send a mixed message for a culture that doesn’t even value marriage, but that doesn’t mean being a mother is unacceptable.

Let me tell you something, ladies: contrary to what the world tells us, you do not need a career to live a fulfilled and successful life!

Motherhood is not just a second option, nor is it for weaklings who couldn’t make it in the “real world.” Motherhood is a true calling from the Lord, and a lifelong commitment that is not for the faint of heart! So why has our culture labeled this as unacceptable?

Contrary to what the world tells us, you do not need a career to live a fulfilled and successful life! Motherhood is not just a second option, it is a true calling from the Lord. Click To Tweet

Since mankind first sinned in the Garden of Eden (Genesis 3), the world has progressively wandered further and further away from God. Today, we see evidence of this in many ways, but specifically in how the culture we live in has gradually twisted God’s beautiful design for marriage. Especially within the last century, because we see the different waves of feminism and new laws about abortion and homosexual relationships. The world essentially celebrates sins such as promiscuity and abortion, but devalues marriage between one man and one woman. It discourages their God-given duty and privilege to be fruitful and multiply – hence the degradation of motherhood.

The world is a broken place, but because God’s redeeming grace through His Son Jesus Christ has delivered us from our sin, we should seek to honor and glorify Him despite what society says.

My mother once told me, “Motherhood is not glamorous, it is meaningful. And being a part of something meaningful can fill you with that deep satisfaction that being glamorous never can.”

As I mentioned earlier, motherhood is not for the faint of heart. Just try babysitting for over three hours. In addition to being sweet and adorable and hilarious, children can be crazy – but they are made in the image of God, and require lots of patience, love, and care. They have eternal souls which need to be led to the Lord. Motherhood is all about nurturing and raising them so they can flourish in the lives God has given them. The goal of motherhood (and fatherhood too!) is to “bring them up in the discipline and instruction of the Lord,” (Ephesians 6:4).

As Jesus says in Matthew 19:14, “‘Let the little children come to me and do not hinder them, for to such belongs the kingdom of Heaven.’”

Additionally, Proverbs 22:6 says, “Train up a child in the way he should go; even when he is old he will not depart from it.”

This is not only God’s calling for us but also commands which should be obeyed! All of creation glorifies God when it does what He created it to do.

There is nothing wrong with wanting a career since God calls everybody to a unique purpose, but if you know God has called you to get married and raise your own family someday, please, please stop worrying about what others will think of you and be a wonderful example in a world full of people who don’t know the Lord.

When I finally did open up and start talking about my calling, I realized I was not, in fact, the only one among my peers. I am so blessed to have like-minded friends who share the same values as I do! You’ve heard it said, “Honesty is the best policy.” The next time someone asks you what you want to do with your life, my challenge to you is to be honest! Once you put yourself out there (and are willing to tell people why you want to be a mother), you’ll find you are not alone!

Ladies, if you know this is God’s calling for your life, I encourage you to someday find a husband who will love you and your call to motherhood and be willing to work hard so you are free to raise your children at home. And likewise for all young men reading this, I encourage you to someday find a wife who will willingly surrender her entire career to care for you and the children you have together. Marriage is still a few years down the road for me yet, and it may be for you too, but this is all something important to keep in mind while we are waiting for God’s plans for us to be fulfilled!

The world hates families and wants to see them torn apart. It’s a hard truth, I know. But the Church – both local and global – thrives on Christ-like families who glorify God through this amazing calling to get married and raise children according to His design.

Olivia Hagg was born and raised in North Texas and is passionate about sharing the light of the Gospel with others through writing articles and children’s stories. She also enjoys watching sunsets, listening to hymns, reading, art journaling, and babysitting. She is looking forward to studying theology and music in college, and can usually be found in her Hobbit hole, writing blog posts or the next big family read-aloud.

By Olivia Hagg 2 weeks ago
8 comments