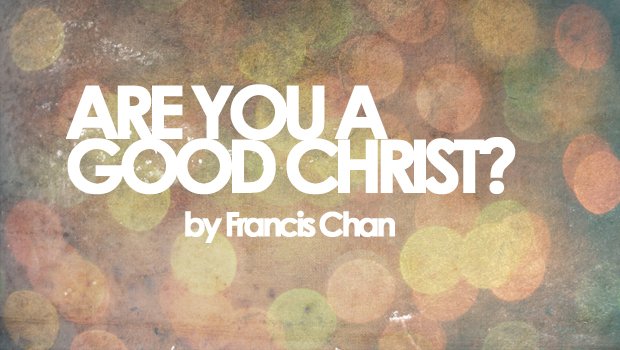 Praise God for Francis Chan. His book, Crazy Love, was an extraordinary challenge and encouragement to us this past summer — and he has continued to speak and write about the beautiful (yet devastating) truths of the Gospel. A friend shared this article with us and we wanted to share it with you. May you experience the same conviction we felt — as well as the same grace to grow in response.

I think it’s time we stop asking ourselves the question: “Am I a good Christian?” We live in a time when the term “Christian” has been so diluted that millions of immoral but nice people genuinely consider themselves “good Christians.” We have reduced the idea of a good Christian to someone who believes in Jesus, loves his or her family, and attends church regularly. Others will label you a good Christian even though your life has no semblance to the way Christ spent His days on earth. Perhaps we should start asking the question: “Am I a good Christ?” In other words, do I look anything like Jesus? This question never even entered my mind until a friend of mine made a passing comment to me one day.

Dan is a long time friend of mine. In fact, he’s the pastor who performed my wedding. He was talking to me about a pastor named Von. Von has been working with youth in the San Diego area for decades. Many of his students have gone on to become amazing missionaries and powerful servants of God. Dan described a trip to Tijuana, Mexico with Pastor Von. (Von has been ministering to the poor in the dumps of Tijuana for years). Dan didn’t speak of the awful living conditions of those who made their homes amidst the rubbish. What impacted Dan the most was the relationship he saw between Von and the people of this community. He spoke of the compassion, sacrifice, and love that he witnessed in Von’s words and actions as he held these malnourished and un-bathed children. Then he made the statement that sent me reeling:

“The day I spent with Von was the closest thing I’ve ever experienced to walking with Jesus.”

Dan explained that the whole experience was so eerie because he kept thinking to himself: “If Jesus were still walking on earth in the flesh, this is what it would feel like to walk alongside of Him!” After that discussion, I kept wondering if anyone had ever said that about me: “The day I spent with Francis was the closest thing I’ve ever experienced to walking with Jesus.” The answer was an obvious “no.” Would any honest person say that about you?

What bothered me was not that I hadn’t “arrived,” but that I wasn’t even heading in the right direction. I hadn’t made it my goal to resemble Christ. I wasn’t striving to become the kind of person who could be mistaken for Jesus Christ. Isn’t it ironic that a man can be known as a successful pastor, speaker, and CHRISTian even if his life doesn’t resemble Christ’s?

Read the rest at CatalystSpace