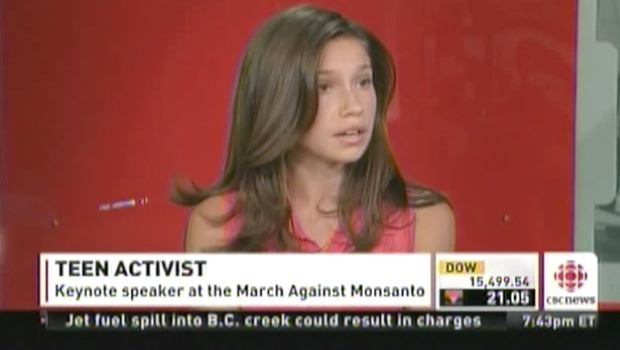 (HuffPo) — Anti-GMO activist Rachel Parent got in a spirited debate with Kevin O’Leary on CBC’s “The Lang And O’Leary Exchange” Wednesday night.

Parent, who scored the debate after a speech she gave critical of O’Leary’s comments about GMOs was featured on HuffPost Canada, argued genetically-modified foods should be labelled in Canada and the United States. Europe, Japan, Australia and other nations require GMO labels, but Canada and the U.S. do not.

O’Leary was quick to suggest Parent is essentially operating as a lobbyist for anti-GMO groups and said changes to the DNA of crops will save lives.

“Let’s say you weren’t as lucky as you are, you were born in an Asian country, you’re 14 years old, your only food was rice that had no Vitamin A in it, you’re going blind and then you died,” O’Leary said. “Five-hundred-and-fifty-thousand people your age die that way every year. And a company like Monsanto could come along and offer you a genetically-modified rice that includes Vitamin A that could save your eyesight and your life.”

“Golden rice was scrapped because it didn’t work. And in order for the average 11-year-old boy to get enough Vitamin A from rice he would have to eat 27 bowls of rice per day,” she said. “The reason there is blindness isn’t because there is a lack of Vitamin A in the rice, it’s because their diets are simply rice.”

O’Leary asserted that golden rice is still being tested and that we shouldn’t put limits on science that could potentially alleviate the world’s hunger problems.

Parent acknowledged that we shouldn’t completely ban companies from growing GMO crops, but said non-industry groups and government need to do more testing and that we need mandatory labeling laws so consumers can choose for themselves. The teen activist said most testing is currently done by the very corporations that stand to profit from using GMOs.

O’Leary pointed out that long-term tests are underway, via the introduction of GMOs into the general food supply.

Roughly 90 per cent of the corn, cotton and soy planted in the United States is genetically modified, Lang said, before chiming in with what was probably the highlight of the segment

O’Leary said he was worried Parent was becoming a “shill” for anti-GMO groups because she is young and articulate and doesn’t actually understand the science. Lang subsequently tried to soften O’Leary’s “shill” accusation, saying the show had no evidence for the claim.

While the debate didn’t do much to change either combatant’s position on GMOs, it did give an excellent primer on the issues surrounding the explosion of foods with DNA altered to include characteristics from other organisms.