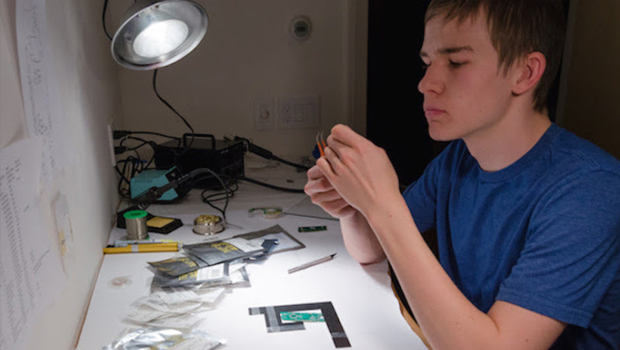 BOULDER, Colo. – A 17-year-old inventor in Boulder will receive a $50,000 grant to help develop a biometric sensor designed to prevent unauthorized people from firing guns.

“I’ve been interested in technology for as long as I can remember,” Kai Kloepfer said. “After the mass shooting in the movie theater in Aurora in 2012, I started thinking about the role technology could play in preventing accidents and death related to firearms. The idea actually came to me in a dream and I have been working since then to make it a reality.” Kloepfer’s sensor, installed on a plastic model of a Beretta Px4, uses stored fingerprints to tell which authorized user is holding a gun and to prevent unauthorized users from firing it. In tests, the sensor worked 99.99 percent of the time.

With the $50,000 grant from the Smart Tech Challenges Foundation, Kloepfer hopes to transfer the sensor to a real gun and move toward market-scale production, the foundation said.

Kloepfer’s grant comes as part of the Smart Tech for Firearms Challenge, aimed at improving firearm safety by furthering innovation around personalization features in firearms, locking devices and ammunition systems in order to reduce gun tragedies.

Last year, Kloepfer’s biometric technology placed him in a group of the top 34 out of 7 million high school students at the 2013 Intel International Science and Engineering Fair.

Photos courtesy of TechCrunch and MTV.