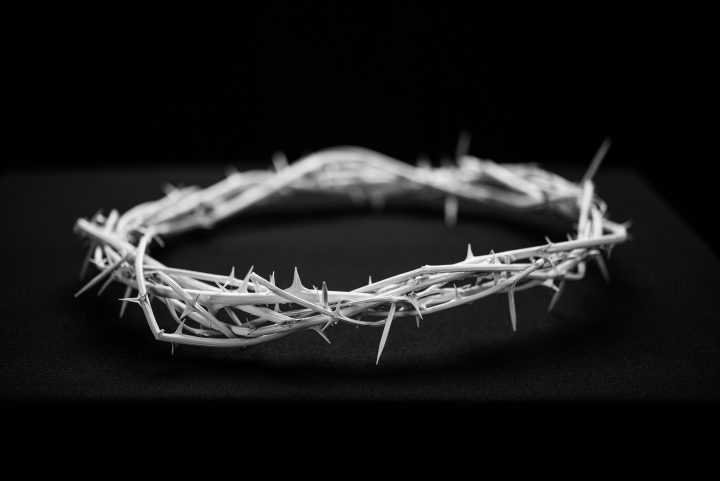 For most of you, Easter is probably over. Your thoughts have turned to graduation, summer break, camping, etc.

But for the disciples, I’m sure that first Easter stuck around in their minds for a long time. It was an incredible, life-changing miracle they had to process… and it probably took longer than three days.

One day, their hope was literally dead. The next, He was standing before them whole and alive. Not only would they have to wrap their heads around the grief and joy, but they also had to comprehend the purpose of all that happened and what it meant for them.

This year, for me, Easter isn’t over yet. This year, I am still processing the grief and the joy and the purpose.

Thoughts of the purpose led me back to the beginning, to the very reason for the crucifixion and resurrection. It led me to Adam.

1 Corinthians 15:45-49 says, “Thus it is written, ‘The first man Adam became a living being’; the last Adam became a life-giving spirit. But it is not the spiritual that is first but the natural, and then the spiritual. The first man was from the earth, a man of dust; the second man is from heaven. As was the man of dust, so also are those who are of the dust, and as is the man of heaven, so also are those who are of heaven. Just as we have borne the image of the man of dust, we shall also bear the image of the man of heaven.”

Jesus is the man of heaven. How was He able to strip us of the image of the man of dust and give us His own?

The answer is Easter.

Adam’s choice was a powerful one. It brought consequences to the entire world, present and future.

His choice dirtied what was clean, corrupted what was perfect, and killed what was alive. It did what no human could reverse.

It might seem like his choice was the most powerful in history, but it wasn’t. Any man can bring death to life, but only One can bring life to death, and His choice was so powerful it literally rocked the world.

“Therefore, just as sin came into the world through one man, and death through sin, and so death spread to all men because all sinned… But the free gift is not like the trespass. For if many died through one man’s trespass, much more have the grace of God and the free gift by the grace of that One Man Jesus Christ abounded for many. And the free gift is not like the result of that one man’s sin… For if, because of one man’s trespass, death reigned through that one man, much more will those who receive the abundance of grace and the free gift of righteousness reign in life through the One Man Jesus Christ.” (Rom 5:12-17)

Jesus’ action was far more powerful than Adam’s. He reversed the curse by walking in Adam’s footsteps and doing what he could not.

Adam’s choice was a powerful one. It killed what was alive, and did what no human could reverse. But Jesus’ action was more powerful. He reversed the curse by walking in Adam’s footsteps and doing what he could not. Click To Tweet

God made Adam to be like Himself. He formed Him with His own hands. He breathed His own life into him (Gen 2:7). You could say, He fathered him.

When God looked at Adam, He called him very good. Not just good like the rest of creation, but very good. But this good son did not stay good.

In John 14:9 Jesus says, “Have I been with you so long, and you still do not know Me, Philip? Whoever has seen Me has seen the Father. How can you say, ‘Show us the Father?’”

Jesus is the new and perfect image of God. He is such a flawless representation that seeing Him was no different from seeing the Father Himself.

This Son is also called very good. When Jesus was baptised, God spoke from heaven saying, “You are My beloved Son; with You I am well pleased.” (Mark 1:10-11)

It is here that Jesus begins to reverse the curse of the first Adam, and living a perfect life is only the beginning.

The Gardens of Wills

Adam was placed in a garden, the Garden of Eden. The word Eden means “paradise”, and a paradise it was. It was a place of perfection, dripping with life and echoing with the voice of God which brought it into being.

Adam had the run of the place. He knew no evil, no want, no pain. God only asked one thing of him: He asked him not to eat the fruit of the tree of the knowledge of good and evil. If Adam ate it, he would die.

This is where Adam fell short. There in the Garden, he looked at what could end his life and said, “My will not Yours.”

Jesus was placed in a garden too, the Garden of Gethsemane. Gethsemane means “olive press”, and in ancient Israel, olives represented peace. But there was no peace in the Garden the night Jesus was arrested.

Jesus could have had the run of the place, He proved this by healing the servant’s ear after Peter cut it off. But this is where He succeeds when Adam fails. Jesus looks at what could end His life and says, “Your will not Mine.”

In his garden, Adam was presented with a tree, and the tree held a choice. The choice to obey God or disobey God, to eat the fruit or not eat the fruit, to live or to die.

Like I said before, Adam chose to say, “My will not Yours,” to God. He chose the tree and, in choosing the tree, he chose death not only for himself but for all of humanity.

Jesus too was presented with a tree and a choice. The choice to obey or disobey God, to die or live. Jesus said, “Father, not My will but Yours be done.”

Jesus chose obedience. He chose the tree. He chose death. His tree and His death brought life to all humanity, reversing Adam’s tree and Adam’s death, because His choice was made in obedience to the Father.

Jesus chose the tree. He chose death. His tree and His death brought life to all humanity, reversing Adam’s tree and Adam’s death, because His choice was made in obedience to the Father. Click To Tweet

When Adam chose the tree, he fell under the deception of a serpent, a serpent we know as Satan. When Adam’s choice to listen to the serpent brought death to all the earth the serpent thought he had won. And to all involved it appeared he had.

But it wasn’t over.

When Jesus chose the tree and died a criminal’s death, it seemed the serpent had won again. He probably laughed with complete glee when the perfect Son of God breathed His last breath without saving the world He loved.

But it wasn’t over.

The Bible says that the damage done to Jesus by the serpent was comparable to a bruised heel. Yet when Jesus burst from the grave, whole and alive, Scripture says He crushed the serpent’s head (Genesis 3:15). He annihilated him. There was no longer any room to believe the serpent had won.

In C.S. Lewis’ famous novel, The Lion, The Witch and The Wardrobe, the lion Aslan says, “The witch would have known that when a willing victim who had committed no treachery was killed in a traitor’s stead, the Table would crack and Death itself would start working backwards.”

Death itself would start working backwards… I can’t think of a better, simpler way to put it. Jesus went back and undid everything Adam did so that death would work backwards, bringing life.

Jesus went back and undid everything Adam did so that death would work backwards, bringing life. Click To Tweet

What did this cause?

Through Gandalf the wizard and Sam Gamgee, J.R.R. Tolkien puts it this way:

“’Gandalf! I thought you were dead! But then I thought I was dead myself. Is everything sad going to come untrue? What’s happened to the world?’

That’s what happened. When death started working backwards, a great shadow departed from the world and everything sad came untrue. That is what Jesus did with one simple choice.

Next year, when Easter rolls around again, don’t forget to pause, and contemplate the depth of why the death and resurrection of Jesus happened.

The next time your mind wanders to that first Adam in that first garden with that first tree and you are tempted to think that was the most powerful choice in history, remember the choice of Christ.

Any mere man can bring death, but only God Himself can bring life from death.

Any mere man can bring death, but only God Himself can bring life from death. Click To Tweet

With the first Adam, you didn’t have a choice. You fell under the curse of sin just like the rest of humanity. But you can choose the second Adam, Jesus Christ, and reverse the curse on you. That is your most powerful choice.

By Abbi Langille 4 weeks ago
2 comments