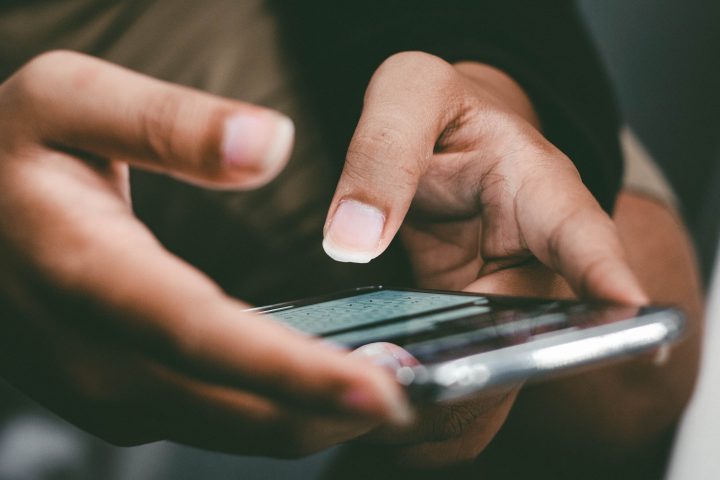 My fingers danced and hovered over the keyboard on my cell phone. I paused and picked at a loose string on my pants. His message glowed blue in front of me—begging me to answer. I ran a hand through my hair and chewed my bottom lip.

Maybe… Maybe I could just ghost him.

The pang of guilt immediately struck my chest with the thought. The poor guy wanted an answer, and rather than deal with the awkward, uncomfortable conversation I knew I had to have, I would have rather thrown my phone in the road and tell him I never got his message because it got run over.

Yet I also know I can’t possibly be the only one who has had this kind of compulsion. Have you ever wished you could just ghost someone online rather than reply with the painful answer you know you need to give? If you’ve felt this temptation, let me assure you that you’re not alone—but also encourage you in a better way forward.

If we’ve felt the temptation to ghost someone, chances are we’ve also felt the pain of being ghosted.

A girl I had been friends with for six years ghosted me. I reached out after a few weeks and received no reply for an entire month. I reached out a second time and still had no reply several months later. Being ghosted hurts, especially when it’s a close friend.

You won’t find a Bible passage on ghosting, but you will find Scripture calling us to love, kindness, and selflessness. As Jesus calls us to do, we should love one another as we love ourselves—even when it means replying to awkward and difficult messages.

If we’re afraid of delivering a hard truth, Proverbs gives us a beautiful picture of true friendship and honesty:

“Better is open rebuke than hidden love. Faithful are the wounds of a friend; profuse are the kisses of an enemy. One who is full loathes honey, but to one who is hungry everything bitter is sweet,” (Prov. 27:5–7 ESV).

While Proverbs is far from a book of promises (rather, it’s a book of wisdom), the author reminds us that while the wounds of a friend are painful, they are better than flattery and lies.A true friend doesn’t mask the truth with false lauding or ghosting but presents the truth in a gracious and humble manner. A friend doesn’t keep their love hidden but has difficult conversations.

A true friend doesn’t mask the truth with false lauding or ghosting but presents the truth in a gracious and humble manner. Click To Tweet

Concealing your true feelings, smudging the truth, or avoiding the elephant in the room will only strain your relationships and keep your Christian friendships from operating as Christ’s church should. We cannot build one another up in holiness if we are ghosting and lying.

“Therefore, having put away falsehood, let each one of you speak the truth with his neighbor, for we are members one of another,” (Eph. 4:25).

Yet Refuse to Throw Pearls Before Swine

Sometimes, the hard conversation you desperately want to avoid is also one you need to end. Just because we refuse to ghost others doesn’t mean we need to participate in foolish and unhelpful conversations. Perhaps it’s the direct messages of an online bully—in which case, you need to talk to your parents and teachers and remove yourself from their harmful words.

Aside from internet trolls and cyberbullies, there are also people who aren’t necessarily unkind but are simply out to argue with you. They may cushion their conversation with the word “debate” but there’s nothing fair about this discussion. They aren’t seeking to understand your position, listen to your words, or have their mind changed—they only want to argue.

In these cases, we don’t need to ghost, but we can say, “I’m done with this conversation,” in a respectful way.

Once again, it’s much easier to ghost or simply continue the conversation than to tell someone you’re done. It may even feel un-Christlike to end the discussion. Yet Jesus Himself, speaking of hypocrites, warned His people, “do not throw your pearls before pigs,” (Matt. 7:6).

It’s biblically wise to end conversations with a fool or a bully.

Proverbs advises us, “Do not speak to a fool, for he will despise the wisdom of your words,” (23:9) It’s biblically wise to end conversations with a fool or a bully, don't feel guilty about it. Click To Tweet

A Lifetime of Hard Conversations

As we all grow up, we’ll be faced with hard conversations. Perhaps they’ll get easier with time. Yet as believers, we need to resist the cultural pull to simply ghost others when these hard exchanges come up. This doesn’t mean we need to be cruel in our replies—hard and uncomfortable conversations can be done respectfully and humbly.

Perhaps a friend is asking a favor you don’t have the bandwidth for; you can politely decline.

Maybe an atheist from your homeroom loves to try to bring out strawman after strawman when “debating” with you in personal messages. You have permission to say, “Thank you for reaching out! I’m going to go do XYZ now, so have a good day!”

Or perhaps there’s a boy or girl who really likes you, but you don’t share the same feelings—yet they keep flirting with you in text and it’s becoming bothersome. A few months ago, I (shamefully) advised a friend to simply ghost the guy. However, Christ calls us to love and honesty: “Hey! I just wanted to set the record straight here. I think you’re a wonderful person, but I’m just not interested in a romantic relationship.”

Have the hard conversations, Christian. Refuse to ghost. It’s awkward and painful, but true friendships may grow from it.

is a freelance writer from Nova Scotia, Canada. She is a regular contributor to Well-Watered Women, a staff writer for Gospel-Centered Discipleship, and editor-at-large for Beautiful Christian Life. You can find more of her writing on her blog: laradentremont.com

By Lara Dentremont 5 months ago
2 comments