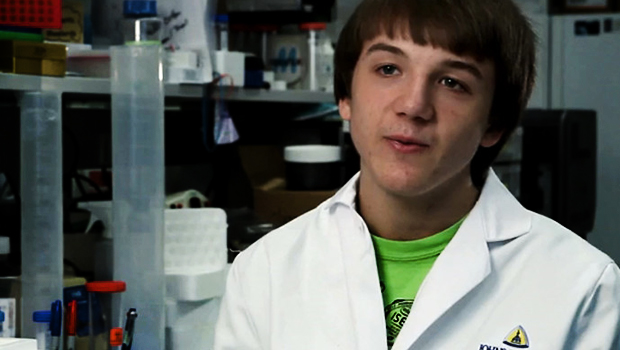 Check out this incredible story about 15-year-old Jack Andraka—a passionate teen who has single-handedly revolutionized the diagnosis and treatment of one of the most deadly forms of cancer after it claimed the life of his uncle.

Wait, Did This 15-Year-Old From Maryland Just Change Cancer Treatment?

If you’re feeling anxious about how U.S. kids lag the world in science and math … take in this story of a high school freshman from Crownsville, Md. who came up with a prize-winning breakthrough that could change how cancer and other fatal diseases are diagnosed and treated.

His name is Jack Andraka, and he loves science and engineering with every inch of his 15-year-old soul. Just spend a minute or so watching this video. Seriously, do it now before you read more. Nothing from the Oscars or Grammys comes close to the unabashed excitement and joy of Andraka charging up to the stage to accept his $75,000 grand prize at the Intel International Science and Engineering Fair in May. This is the Olympics of youth science, with more than 1,500 entries from 70 countries competing, each of which already won their national competitions.

I first saw Andraka present his discovery at a TED worldwide talent search in New York two weeks ago. In only three minutes he had the audience dumbfounded with the results of his work: a paper test strip that uses minute changes in conductivity to detect targeted viruses or antigens faster, cheaper and more accurately than today’s standard diagnostics. It seems too good to be true, but the panel of judges at the Intel science fair are not rubes. For a teenager he is disarmingly forthright and direct in talking about complex chemistry, but he’s also good at making it understandable to the lay person.