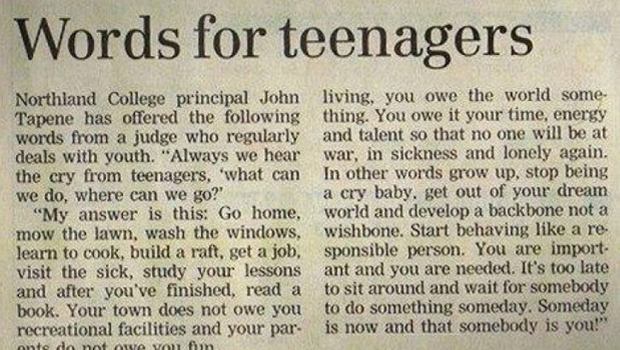 Most people don’t know anything about Colorado Judge Philip Gilliam, except that he wrote a hard-hitting letter in a Denver newspaper in 1959 (called Open Letter to Teen-ager) that went viral on Facebook in 2012 — very viral, in fact.

How did this happen?

Well, Judge Gilliam published his little op-ed on December 6, 1959. Just over half-a-century later, in 2010, The Pierce County Tribune in North Dakota (of all places) republished the letter on their website.

From there, a school principal in New Zealand posted his own rendition of the op-ed in his school’s newsletter (see above) — which found its way to Canadian radio station Mix 96.7, which posted the letter to its Facebook page, leading nearly 25,000 people to share it on their walls, and the rest, they say, is history.

Speaking of history, there’s more to this story…

If you only read Judge Gilliam’s words on Facebook you might come away with the impression that this was just a cranky old guy letting off some steam at the young whippersnappers littering all over his yard — and you would be dead wrong.

Judge Philip Brewster Gilliam was no stranger to the struggles of youth.

With fathers gone to war and mothers gone to work, hundreds of thousands of unsupervised young people turned delinquent in the 1940s, often ending up before men like Judge Gilliam on charges ranging from truancy and petty theft to arson and murder.

For a quarter-of-a-century, from 1940 through 1965, Judge Gilliam was the sole arbiter of these cases in the populous city of Denver, Colorado — sitting down each year with hundreds of young felons, troublemakers, and petty criminals.

Early in his career he wrote:

“To work with delinquents requires limitless patience, and at times it seems almost an endurance test to those so engaged.”

Judge Gilliam endured for thirty-three years and was a tireless advocate for the young, wielding his substantial popularity to direct new resources towards preventing juvenile delinquency and helping those already in the system.

Today Denver’s Juvenile Hall, located at 28th and Downing Street, is named in his honor.

One year, just a few weeks before Christmas, he took the time to pen an op-ed for Denver’s South Bend Tribune. Published on December 6, 1959, Judge Gilliam’s Open Letter to Teen-ager doesn’t mince words.

But if anyone had the credibility to issue such a challenge, it was the dogged champion of the Denver Juvenile Court.

Here’s the original letter in its entirety:

Always we hear the plaintive cry of the teen-ager. What can we do? … Where can we go?

The answer is GO HOME!

Hang the storm windows, paint the woodwork. Rake the leaves, mow the lawn, shovel the walk. Wash the car, learn to cook, scrub some floors. Repair the sink, build a boat, get a job.

Help the minister, priest, or rabbi, the Red Cross, the Salvation Army. Visit the sick, assist the poor, study your lessons. And then when you are through — and not too tired — read a book.

Your parents do not owe you entertainment. Your city or village does not owe you recreational activities.

The world does not owe you a living… You owe the world something.

You owe it your time and your energy and your talents so that no one will be at war or in poverty or sick or lonely again.

Grow up; quit being a crybaby. Get out of your dream world and develop a backbone, not a wishbone, and start acting like a man or a lady.

You’re supposed to be mature enough to accept some of the responsibility your parents have carried for years.

They have nursed, protected, helped, appealed, begged, excused, tolerated and denied themselves needed comforts so that you could have every benefit. This they have done gladly, for you are their dearest treasure.

But now, you have no right to expect them to bow to every whim and fancy just because selfish ego instead of common sense dominates your personality, thinking and request.

In Heaven’s name, grow up and go home!

Wow! Reading those last few paragraphs helps you understand why that New Zealand principal felt like “editing” Judge Gilliam’s letter to be a little more politically correct and, well, nice.

But now you know a little more of the history behind this Facebook phenomenon (and have the read the actual letter) — what do you think?