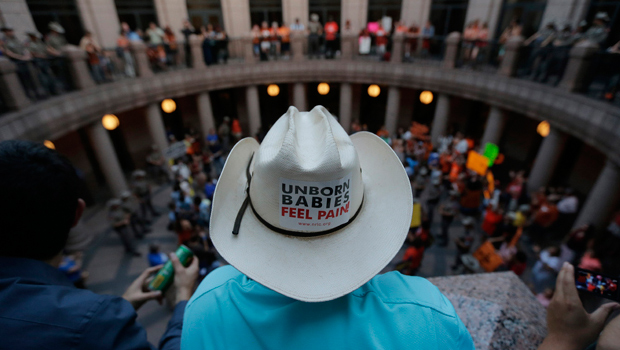 When I was a little girl I memorized one of my favorite scriptures in the Bible. Psalm 91, filled with encouragement for the believer to find refuge in God, held the mysterious truth of an invisible protector who hides us under the shadow of His wings and delivers us from all wicked forces. I’ve always been captivated by the spiritual realm, knowing one day it would be my permanent home. But, as a little girl, I had no idea how Psalm 91 could resonate in my life here on earth, until July of this year.

On Monday, July 8th, I found myself wearing blue standing in my state Capitol in Austin, Texas, fired up and ready to stand for life. I arrived with some close friends, my mom and older sister just in time to cast our vote and head out to the Capitol steps for the pro-life rally. It was great. Senators and Representatives, leaders and organizational presidents spoke confidently about the bill the Senate was about to pass, HB2, and how it would bring an incredible victory for the unborn.

A sea of blue stood all around me, reassuring of the fact that I wasn’t alone. The days that led up to this event I had spent praying and taking in as much of the Word as I could. I spent time researching scriptures that spoke of being crucified with Christ and persecuted for His sake. I did that because I knew what I was about to stand for was hated by the world. I understood that this fight was so much more spiritual than physical, and I wanted to be prepared. Later that evening, I realized how important my preparation actually was.

When the pro-life rally came to a close, a band stationed on the stage began playing familiar worship songs. Songs like “Mighty to Save” and Chris Tomlin’s “Whom Shall I fear” were being sung out by many voices when suddenly I looked to my right and saw what looked like an army of pro-choicers lining the street. The crowd of blue started to trickle away as the mob of orange burst through to the front of the building. I stood with my friends, raising my hands high in an outward declaration of my faith and sang as loud as I could.

“The God of angel armies is always by my side.”

They yelled, chanted, screamed and accused us. As the band grew louder, so did the mob.  As they screamed about their rights, I proclaimed the name of Jesus. Looking all around I could see Jesus’ words coming to life. “If you were of the world, the world would love its own. Yet because you are not of the world, but I chose you out of the world, therefore the world hates you.” John 15:19.

They kept pressing us closer and closer together, but I was never afraid. I felt an unexplainable peace guarding my heart. It was at that moment I fully understood the war I was fighting. The orange team represented darkness, and the blue represented light. I could just picture a battle between demons and angels going on above our heads and we were just the representatives. That is why I was there — to represent Christ. I was prepared to take a stand for life, but at the same time I was standing for Christ.

Psalm 91 became so real to me while at the Capitol. I felt protected under the shadow of God’s wings and knew nothing could hurt me. I’m sure the bill would still have passed even if I hadn’t made the decision to go. But the message I want to proclaim to all young believers is this: We are called to stand for Christ.

We are called to stand for Christ. Whatever that means to you, don’t take it too lightly. We live in a world where darkness is trying to overtake the light, and with the smallest of steps we can put darkness back in its place. That step for me was physically standing for truth. What the world voted to be insignificant tissue, I saw as life; and what I deemed an insignificant sacrifice, God proudly declared a step of faith.

Whatever your fight may be, take heart! You are on the winning team and no small step of faith is voted insignificant in God’s kingdom.  One thing is certain — “He shall cover you with His feathers and under His wings you shall take refuge; His truth shall be your shield and buckler” and all you will ever need from this life into the next.

is a passionate young woman who decided at an early age to live life on purpose and to set the trend rather than follow the crowd. Some of her favorite things are leading worship at her church youth group, fashion designing and acting. Her goal in life is to love unconditionally no matter the circumstance and encourage others to see the potential she knows God has placed inside each individual.