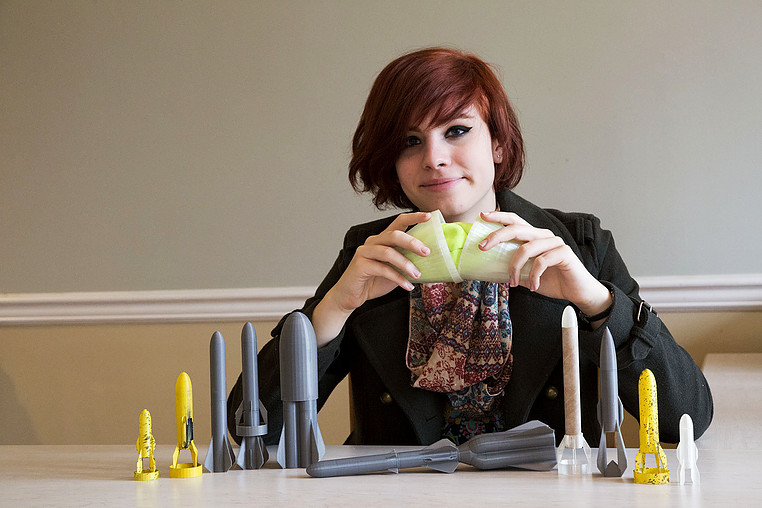 We just recently stumbled across this article from Smithsonian.com, published last summer. Meet Alexis Lewis, a teenage inventor who thinks all kids have the capability to invent. Here is a powerful and inspiring interview with the then 15-year-old.

In the United States, there is no age requirement for filing a patent.

Alexis Lewis, a 15-year-old inventor in Chapel Hill, North Carolina, wants children across the country to know that an inventor isn’t something you have to be when you grow up; they can be one now.

Lewis holds a patent for a wheeled travois—a triangular load-carrying device with a bamboo frame and a bed of netting that she designed to serve Somali refugees, who need to transport their children many miles to camps and hospitals. Her patent-pending emergency mask pod is a football-shaped canister with protective gear that firefighters and first responders can throw through a window of a smoke-filled building to those trapped inside.

Why should more people invent?

What motivates you to invent?

My inventions are motivated by one of two things usually. One, it’s a humanitarian issue, basically people who aren’t getting the help they need, people who are dying unnecessarily when they could be saved. Another reason that I often invent is that I’ll get myself absolutely buried in a piece of physics, just learning about it obsessively. Then, I start to realize that there are little things that can be done to make technologies revolving around it a little bit more efficient here, a little bit more effective there.

Can you tell us a little bit about the environment you grew up in and how that’s impacted you as an inventor?

My mom would always read to the family about various world issues. When Hurricane Katrina hit [Alexis was 5 years old], we learned all about that—what a hurricane was, how it worked, the effects of Hurricane Katrina itself, what they were doing to help clear out floodwaters, all sorts of fascinating stuff. Being homeschooled, I had a lot of free time in which I was encouraged to basically go and do and build almost anything I wanted. I had access to videos on any subject, so I got to learn about the science of everything, and I read voraciously. I think having those channels of knowledge open to me was completely invaluable.

Do you think you have some advantages as an inventor given the fact that you’ve started young?

I don’t mean to put adults down, but when you’ve grown up and you’ve seen the world for a long time, you think its one way. I’d say that starting young has had an advantage in that I have the ability to look at something and not think, “oh this is a problem that can’t be solved,” but instead think maybe we’ve been looking at it just a little bit wrong. Kids, since they haven’t been told this is something that would never work over and over, have the have the ability to do that.