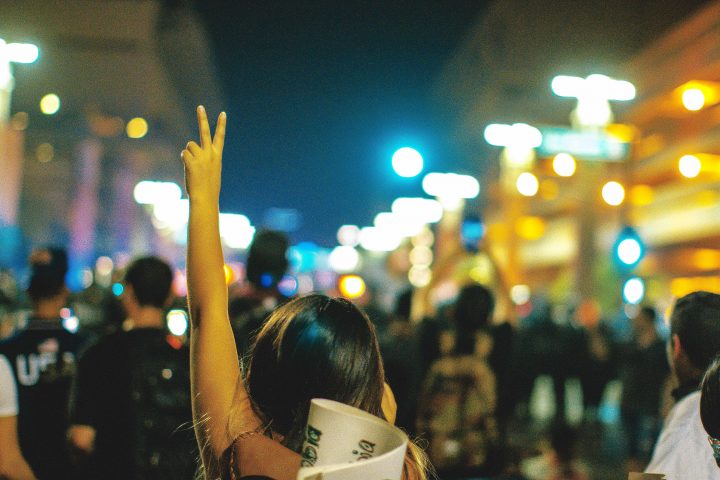 The night of the last presidential election, I made a poor decision.

My feed was full of tweets and retweets rejoicing, mourning, celebrating, or decrying the situation as it unfolded, minute by minute. Praise and blame was heaped on both of the major candidates—and on their supporters.

My birthday came just a year too late for me to vote in the presidential election. As I scrolled through Twitter that night and watched individuals from both political “camps” tear each other apart, I was left wondering: Whose side am I on?

For a multitude of reasons, the internet encourages us to polarize. Pick a side, pick a side, polarize. Are you Republican or Democrat? Arminian or Calvinist? Conservative or liberal? Pentecostal or cessationist? You’d better choose which group, ideology, or party you will serve, and quickly—and then take up arms and be ready to fight with all you’ve got against the “other side.”

But is that how we’re really supposed to act as Christians? The Bible is full of commandments to love—love with brotherly kindness, love those who are different from or even opposed to you, love those who persecute you (Matthew 5:44; John 13:34-35). And although rebuking in love is often necessary, it doesn’t often take the form of a Facebook comment.

Our culture is unquestionably diverse. Varying viewpoints and worldviews and opinions abound—even within the church. Sooner or later you’re going to run into someone who thinks differently than you do.

How should you respond? Should you jump into the fray to destroy every idea that doesn’t agree with yours? Or should you just back off and let people think what they want (even when it might be harmful)?

Here are four things to keep in mind as you debate or discuss hard issues—either with non-Christians or fellow believers.

1. A Person Is Not Their Viewpoint

We have a disturbing tendency to reduce people to the aggregate of their opinions—or even to identify them by just one viewpoint or affiliation.

The internet makes this all too easy. After all, I don’t know the person who wrote that tweet. All I know is the words they typed into a screen. So I merely think of them as “Democrat” or “Republican”. At that point all they are in my mind is whatever I associate with that political party.

This attitude is wrong on so many levels.

To begin with, you can’t generalize someone’s entire belief system from one tweet or Facebook comment. Just because I know the platform of a political party doesn’t mean I know every belief of the person in front of me. Just because I’ve studied the atheist worldview doesn’t mean I fully understand every presupposition of the skeptic I meet at Starbucks.

Each one of us carries the image of God as the foundation of our very being (Genesis 1:27). Every person you meet on the street—and every soul behind another screen—bears the likeness of God Himself. That image may be broken, twisted, marred, but it is not destroyed.

What’s more, each of us has a story much larger than what we can see in a momentary interaction. Behind each tweet, post, comment, and conversation is an individual with a story deep and profound, rife with all the sorrow and joy and fallenness and glory of our shared humanity.

We need to learn to engage with people—not just our perceptions of them. That’s going to take hard work. We’ll have to spend time in conversation—conversation that may not always be comfortable. We’ll have to ask questions.

Listening is a lot harder than hastily typing in a sarcastic or intelligent-sounding reply on Facebook. But it will allow us to stop talking past each other and start engaging in ways we can mutually understand.

Let me reiterate—I’m not saying we shouldn’t have intelligent discussion about vital issues! But there is a time and a place for this discussion, and that time and place is usually not Facebook (or Twitter, or the comments section on a blog post).

That’s not to say that civil discourse can’t take place on social media; I’ve seen it happen. But it’s the exception rather than the norm. What occurs far more often is this: someone makes an inflammatory statement; someone else (who likely has no relationship with this person) responds in anger; and on it goes—with both parties talking past each other and neither accomplishing anything.

Most of these debates in the end are pointless. I won’t change your mind with my heated rhetoric, and you won’t change mine either.

Instead, what if we pursued these discussions in the context of present, living, embodied relationships? What if we sat down to dinner together, or took a walk, or went to get coffee, and worked through these questions in real time, where all the nuances of conversation and emotion and personhood can shine through? How much more might we accomplish?

Relationship is messy—it’s where we open up and become vulnerable, where hasty words have consequences and ideas can cut deeply. But this is what we’re made for.

3. Being Right Is Not the Point

There tend to be two reasons we pursue these kinds of conversations. The reason you’re having the discussion will inform every aspect of how you go about it.

The first (and most common) reason is that we know we’re right, and the other person is wrong, and we want to make sure they know it.

The second is an attitude of humility—the desire to seek out and submit to the truth together. This attitude is not only countercultural, it’s profoundly counter to our fallen human nature. We naturally want to be right—at any cost. How often have you kept arguing a point, even when you began to suspect you might be wrong after all, simply because you wanted to win the argument?

But this burning desire to be right is an attitude of tremendous arrogance. It reveals a desire, deep in our hearts, to be gods unto ourselves. We want what is right and wrong, true and false, to conform to our wishes. In essence, we want to steal our Creator’s prerogative of defining reality.

What if, instead of trying to be right, we first came before God, repented of our pride, and asked him to give us a desire for truth—independent of our desires? What if our purpose in having these kinds of discussions was not to win debates, but to seek out truth together?

I’m sure you’ve already seen where this is headed. There’s one common thread that runs through all our heated argument—pride. This is the basis behind most of the angry, divisive discourse that saturates our culture and clouds our perception of every event.

We want to be right. We want to win at all costs. We want to prove ourselves more intelligent, more moral, or more powerful than the other person. Relevant issues just become another platform for us to exalt ourselves.

As Christians, we should reject this tendency. Our faith is built upon a different foundation—upon a realization that God is in heaven and we are on earth. That He is our Creator and we are dependent on Him for everything. That we are undeserving sinners and God the Son humbled Himself to the point of death to save us—even though He had no want or need that we could fill. Our faith is built upon humility and love.

Philippians 2:5-8 gives us the philosophy by which we should live—and debate:

Have this attitude in yourselves which was also in Christ Jesus, who, although He existed in the form of God, did not regard equality with God a thing to be grasped, but emptied Himself, taking the form of a bond-servant, and being made in the likeness of men. Being found in appearance as a man, He humbled Himself by becoming obedient to the point of death, even death on a cross.

By all means, let us discuss relevant issues and work out differences of opinion. But let us do it humbly, in face-to-face, loving, embodied relationship with others, not seeking to be right but seeking out truth together.

We may not win. But truth always will.