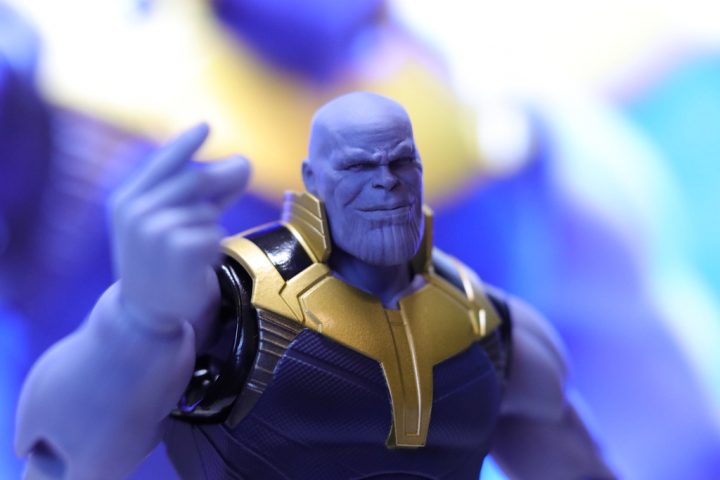 Editor’s Note: This article is spoiler-free for Avengers: Endgame, but contains spoilers for God’s endgame.

You wouldn’t think a purple super-villain could teach you a lesson about God. Yet that’s the effect Thanos had on me.

Like many people, I was intrigued by the antagonist from Marvel’s Infinity War. The premise of the film is that the universe will run out of sustainable resources and life will die out. Thanos wants to solve this problem by randomly killing half the universe. He calls this mercy, salvation.

But as the credits rolled, I began to wonder. What is mercy? Why do Thanos’ actions seem anything but merciful?

In the first five minutes of the movie, a character gives the answer: “[Thanos] will never be a god.”

And that character was perfectly right.

Thanos fears the universe will gradually destroy itself. He slaughters innocents because he believes doing so will save the universe as a whole. But is it right for him to do this?

From a Christian standpoint, we could argue that these people deserved to die for their sins. But that isn’t why Thanos kills them. Do they deserve to die because the universe will supposedly collapse if they stay alive? Is that really justice?

Regardless of what Thanos believes, a wrong never rights a wrong. Murder doesn’t fix overpopulation. The end doesn’t justify the means. When we really think about it, Thanos causes what he’s trying to prevent: death and suffering.

Thanos could never take away the troubles of the world. He could never save them from evil, future disaster, or even himself. His mercy cannot be mercy, because there is no justice, no standard of righteousness for his “compassion” to be weighed by.

A common misconception is that mercy and justice are at odds with each other. Justice is the full brunt of the law; mercy tosses the law aside. But this simply isn’t true. God’s justice is always carried out, but his mercy is show by on whom he exacts judgement.

His justice requires a pure, blameless sacrifice to take away the sins of the world. His mercy predestined this sacrifice to be his Son, Jesus. Only righteousness can cover the evils of sin. He alone is holy and able to bear the full wrath of God.

Through the death and resurrection of Christ, we are saved from eternal judgment. Jesus doesn’t override justice, he fulfills it. God’s righteous standard is still met, the price for sin is still paid, but he took our punishment upon himself. This is his mercy.

Throughout the Marvel Cinematic Universe, Thanos destroys life without a single afterthought. He injures, betrays, and murders. He doesn’t care about the suffering of the world as long as he eventually saves it.

Our God cares. He isn’t indifferent to our pain, and he understands how broken the world is. He lived in it himself. But God doesn’t let suffering make a tangled mess of our lives.

He comforts us in the midst of our pain. He transforms our suffering into a chance to grow closer to him. And when life seems like an endless, broken road, he promises he will always be with us, and one day he will physically dwell with us when he restores the world.

But it isn’t just our environment that’s fallen. We’re sinful ourselves, and conviction of that fact is further evidence of God’s mercy. He points out our transgressions so that we may turn back to him, avoiding the pain our sin would bring and restoring our fellowship with him.

Jesus’ ultimate display of mercy occurred at the cross. He saved us from sin and death, taking the punishment we deserved upon himself.

Thanos continually disregards human life. But our God, he who put the breath of life in us, calls life precious. He does not wish us suffering or cause us pain needlessly.

(Please skip this paragraph if you have not seen Infinity War) In one of the most gut-wrenching scenes in the film, Thanos, in order to earn the soul stone, sacrifices the person he “loves”: his daughter. He betrays Gamora and forces her to pay the price.

Thanos later says saving the universe cost him everything. But is this true? Yes, he throws away the lives of his followers, he kills the person he loves, he brutalizes the Avengers–but he never sacrifices himself.

Jesus said the greatest kind of love is to lay down your life for someone else (John 15:13). He demonstrated this himself. He didn’t avoid the pain of death. He allowed himself to be beaten, mocked, and crucified so that we would be saved.

Mercy doesn’t opt for the easiest solution. It doesn’t tell us to save ourselves and let someone else be hurt. True mercy prompts self-sacrificing love.

Throughout Infinity War, Thanos breaks his promises. He betrays his ideal of mercy every time he makes a character suffer. And since his destruction of the universe is randomized, it means he kills the people on his side.

God’s mercy is different. Lamentations 3:22-23 tells us that his mercies are new every morning–his love, his compassion, his justice, his grace, his comfort, his sovereignty. It never runs out. He never grows tired of showing mercy because mercy is who he is.

God will never lose his cool and say, “You know what, they deserve judgment. Let’s give it to them.” We can never lose our salvation. His mercy is unending for those who are saved by faith.

Mercy is always compassionate, just, sacrificial, and unending. Thanos’ supposed mercy in Infinity War is nothing but a lie. True mercy, perfect and wise, is found in God alone.

So what does this mean for us? We should always be alert to his mercy, whether it’s by praising him for the gift of his Son or marveling in the fact that we’re breathing. His mercies are always around us; we need only to have eyes to see them.

Ask God to give you a merciful heart like his. When others hurt you or make a mistake, be gracious. Offer encouragement and forgiveness, and don’t let bitterness take root in your heart.

Whenever we have the chance, we can share the story of his mercy, whether by explicitly sharing the gospel or just being kind to the people God brings into our lives. Even a simple, “How can I pray for you?” goes a long way. We all need to experience his incredible mercy!

Rachel Evans is a 16-year-old writer living in Minnesota. When she’s not writing, she can be found cuddling with her cat, hanging out with friends, making music, and sketching characters from her novels. You can connect with her through her monthly newsletter.