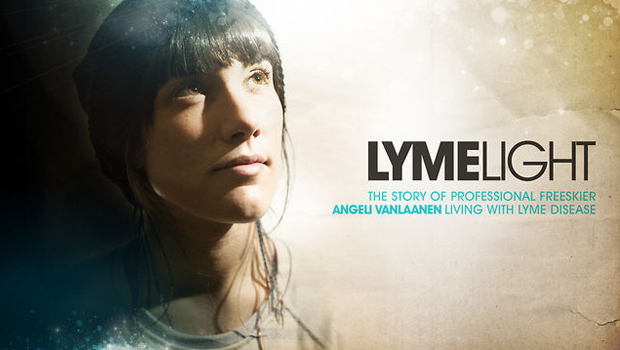 Some of you know that Ana Harris (Brett’s wife) is very sick with Lyme Disease, a nasty infection spread by ticks that can get very serious if misdiagnosed or mistreated. Unfortunately, many Americans (including doctors) are woefully uneducated about Lyme and other tick-borne illnesses, even as new cases continue to be reported at record levels.

This inspiring, 30-minute documentary about 2014 Winter Olympics athlete Angeli VanLaanen will give you a good idea of what Ana and thousands of others Americans are dealing with — as well as educating you about an emerging epidemic that may touch your life or the lives of people you love.

Watch the video above, check out the video description below, and leave us a comment when you’re done. Also, don’t forget to cheer Angeli on when she competes at the Sochi Winter Olympics on Thursday, February 20, in Women’s Halfpipe Skiing.

Video Description from the Creators of LymeLight:

After developing a chronic sinus infection, fainting spells, dyslexia and fatigue, Angeli faced over a decade of misdiagnoses. Through the years, her symptoms fluctuated and progressed into a debilitating chronic illness. In the summer of 2009 VanLaanen was sleeping for multiple days at a time and experiencing crippling body pain.

Lyme Disease is a bacterial infection spread by the bite of an infected Black Legged Tick (commonly known as a Deer Tick). Many children and adults cannot recall a bite because young Deer Ticks can be as small as a poppyseed.

If caught promptly, Lyme Disease can be treated in a matter of weeks. Angeli’s story of misdiagnosis is all too common due to the lack of knowledge in our society and in the medical community.

After her diagnosis in November 2009, VanLaanen was forced to put her competitive halfpipe career on hold at the peak of her career.

“It’s the lowest I’ve ever felt,” Angeli says. “With no guarantee that treatment would relieve my symptoms, I had very little to hold on to.”

Motivated by her struggle, Angeli linked up with Director John Roderick of Neu Productions in November of 2011 to make an awareness piece sharing a raw account of her experience.

“Our goal with LymeLight is to educate people about Lyme Disease, where it comes from, what the symptoms are and the challenges people face reclaiming their health,” says Roderick.

After taking 3 years off from halfpipe for Lyme treatment, Angeli returned to competition and placed 6th at the FIS World Championships and is ranked 9th in the world on the AFP points list for the 2012-2013 season.

After the Olympics, Angeli plans to tour LymeLight in schools around the country as a part of an awareness program she has created. “When I was young I just flicked ticks off of me.” Angeli recalls “I didn’t know to tell my mom or doctor.”

With the help of the LymeLight Foundation, a nonprofit VanLaanen is a spokesperson for, she will educate kids about Lyme Disease prevention and overcoming hard times.